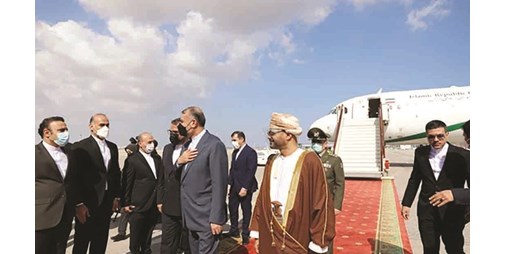 Upon his arrival in the Omani capital, Muscat, on an official visit yesterday, Abdollahian said, “We hope to strengthen relations with the Gulf states and achieve progress in our relations with them, as happened with our neighbors in the north,” according to the semi-official Fars News Agency. “We are working to activate the trade route between Turkmenistan, Uzbekistan, Iran and the Sultanate of Oman, and we focus on strengthening relations with neighboring countries,” he added. He stressed that “the relations between Tehran and Muscat are ancient and stable, and in this context we pay attention to strengthening them to include various political, cultural, economic and commercial fields.” The Iranian news agency (IRNA) reported that Abdollahian’s talks in Muscat focused on discussing ways to strengthen bilateral relations between the two countries in various political, economic and cultural fields, as well as exchanging views on regional issues.

They filter the name of the new host of MasterChef

On the verge of tears, Grettell Valdez reveals that part of a finger will be amputated
Leave a Comment