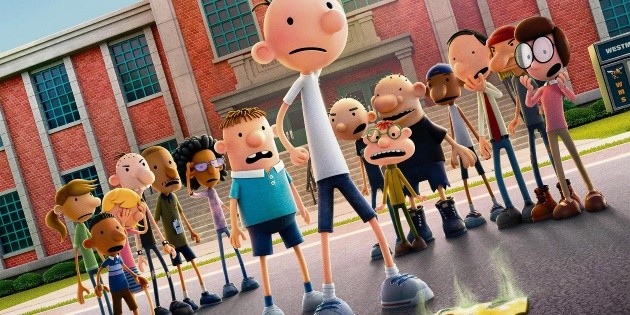 Based on the first title of the famous book series written by Jeff Kinney (who also wrote the script and produced the film), “Greg’s Diary” is a new version that was directed by Swinton Scott and has a cast of voices led by Brady Noon, Ethan William Childress and Chris Diamantopoulos.

Although the first book of this series appeared published in 2007, the character gained the sympathy of readership very soon and, in this way, he became a best seller righ now; Today, the series is made up of 16 titles that continue to help many children discover the pleasure of reading and, in addition, it is among the most widely distributed in history thanks to its more than 250 million copies sold.

Now, the 20th Century Fox company had already produced a series of films since 2010 (live-action films) based on the Kinney books, but they did not rule out the idea of ​​creating animated versions of the adventures of “Greg” based on the drawings of human figures with lines that the author made for his books because readers around the world are already quite familiar with that image of the characters.

After considering different formats -from television series to specials- the world of visual entertainment changed completely thanks to the services of streaming And, as Jeff Kinney noted in a recent interview, once that fuss was over, “Disney had acquired Fox and we started talking about adapting each book to make movies.”

The book and the characters Kinney’s initial idea was not to become an author of children’s books but to be a cartoonist or cartoonist but, he says, “when I wrote the first book, it was about a child. It took me eight years to write it and at the time I thought I was writing a fat book for the humor section, which adults would enjoy as a way of remembering their childhoods through history ”.

With everything, in “The diary of Greg“The issues revolve around the protagonist,”Greg Heffley”, An impatient high school student who cares a lot about the opinion of others and always seems to get into trouble; for Kinney, he is a child who thinks “to document his life in high school, which is a pretty difficult time for everyone,” but for the film to work, “the audience had to identify with ‘Greg’, see something of themselves in him. , and almost everything that ‘Greg’ lives is something that we have all gone through at some point, like a mirror of our own lives ”.

Another fundamental character is “Rowley Jefferson”, the best friend of “Greg”, a cheerful boy who tends to embarrass his friend and who, reveals its author, “is in no hurry to grow up, so he is the ideal person to disrupt the plans of ‘Greg’, who wants everything that is supposed to be an adult “, but” ‘Rowley’ is fine the way he is “and the comedy comes with” the frustration of ‘Greg’ trying to get ‘Rowley’ to want to do childish things bigger ”and it doesn’t. Likewise, there are other characters such as the child ‘Fregley’, ‘Manny’, the protagonist’s older brother (‘Rodrick’), the overprotective mother (‘Susan’) and the father (‘Frank’).

Arrive to a good port

Jeff Kinney, as the film’s writer and producer, was genuinely interested in making this project a reality, although he had little experience in this kind of feature film; with everything, clarify that “One of the things that I enjoyed the most about working with Disney it is that they inspired me to make all my characters more three-dimensional, and it was a great challenge to make them more authentic so that the public could identify with them ”.

The writer assures that thanks to this film he was able to learn “how to tell a story that moves. It’s really cool to be able to use my original material and transform it into something that makes people feel ”; in addition, it will be the first time that we will see a “faithful representation of the world of ‘Greg’ in full color. I also think that this story we tell is the best version. It is a classic story of friendship ”.

When it comes to animation, Kinney worked closely with Canadian animation studio Bardel Entertainment; highlights that they made “a lot of modifications and changes with the characters, and it was a great leap when we went from raw 3D animation to the final edition, with all the lighting. When I saw the characters for the first time on that stage, I couldn’t believe it. It was one of the best days of my life because until that moment I didn’t know how they were going to look on screen, and they looked fantastically well finished ”.

In order to tell the story in the best possible way, the producer and writer realized that “we needed more realistic backdrops”, that is, not “like in a photo, but more stylized, with just a few extravagant touches. , but anchored in reality ”, so the changes implemented focused on“ telling a story that feels real, with which we can identify, and I think adding some realism was useful to achieve it ”.

Fourteen years after its first publication, the author retells that first story to a new audience, something that, says Kinney, “makes me very excited because it is the best version of the first book. And to have had the opportunity to work with Disney and create a world-class production like this is truly an incredible privilege. “

“Greg Heffley” is a wimpy but ambitious boy with a great imagination and plans to get rich and famous, all he needs to do is survive high school. To complicate matters, his best friend “Rowley” seems to glide smoothly through life succeeding in everything effortlessly. As the details of his often disastrous attempts to fit in with society fill the pages of his journal, “Greg” learns to appreciate true friends and the satisfaction that comes from standing up for what is right.

The author, screenwriter and producer is number one in sales on The New York Times authors list and winner of six Nickelodeon Kids’ Choice Awards for Favorite Book, for his saga of “Greg’s Diary” (2007). His books in the “Greg’s Diary” series have 79 editions in 65 languages ​​and have sold more than 250 million copies worldwide in just 14 years.

Despite Martín Guzmán’s harsh rhetoric, the government raised rates and continues to comply with IMF demands

Sundance “sick” with COVID-19; it will be virtual