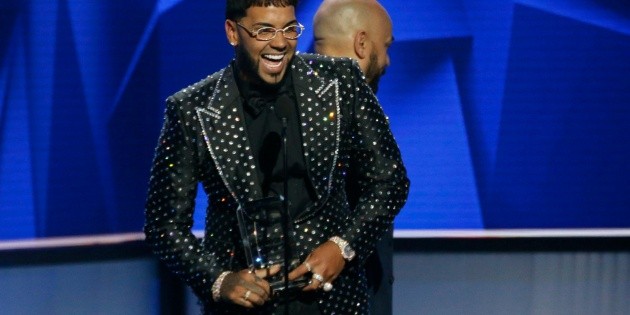 In an interview the Puerto Rican Anuel AA reveals that it shows sorry and honest on his new studio album “Legends never die“, cooked during the months of confinement by the COVID-19 pandemic, a disc in which he also reveals how he has learned to forgive himself.

“Life has given me very hard and on this album I open my heart to them and talk about what I have cried, what I have learned“, said the artist about his most recent album, which allows reflections on masculinity and the value of women.

“It was about time I stopped being so stubborn and learned the lessons that life was giving me,” he admitted.

The first of those lessons that he addresses in the fifteen songs that make up “Legends Never Die”, which is published this Friday, on the trap singer’s 29th birthday, is that “In order to have any successful relationship, you first have to forgive yourself. “.

“That is something that they do not teach us men,” he added.

Then, there are the examples offered by sports stars who recover after falling from their pedestals, such as Conor McGregor, the controversial mixed martial arts champion and whom Anuel refers to in one of the songs on the album.

There are also audios and appearances by other athletes with hectic lives such as the Dominican baseball player Robinson Canó, who appears in the video for “Subelo”, or the American boxer Mike Tyson, cases that the singer hopes will serve so that “many do not suffer so much. “.

“That would make it worth everything that I’ve been through“said the interpreter, who on the cover of the album embraces a replica of one of the NBA trophies that the late Kobe Bryant received.

Among the high points in the personal story of Emmanuel Gazmey, the singer’s real name, are the thirty months in jail to which he was sentenced for illegal possession of weapons, as well as his very public relationship with his now ex Karol G, which he names in several songs on the album.

The artist, whose adolescence was marked by the collapse of family finances, assured that he has not done therapy, although certain signs of change are perceived when the album combines allusions to sex and the female body, which are typical of this genre, with phrases like “you have to fall in love with yourself first“.

“People have to understand that this is a fronting (pretending to be superior) with the panas. This is how people talk on the street, but that does not mean that one is like that,” he said.

“He is like Denzel Washington, who is a very serious man and a Christian who goes to church on Sundays, but when he is a criminal he acts and speaks like them,” he added.

Anuel AA: it’s time to think about his legacy

He does not know if it is because he is on the threshold of three decades or because his only son, Pablo, is already 7 years old, but the artist has begun to think about his legacy and not only wants to inspire with his story, but also give concrete tools to young people.

“I am starting with the youth of my country, who in many cases are unprotected and feel without a future,” said the singer, owner of the basketball and volleyball teams of Los capitanes de Arecibo, along with his agent Frabian Eli.

Furthermore, it is Official sponsor of the Puerto Rico Professional Women’s Basketball League.

“Latin women are the hardest hit in our society and our obligation is to help them get ahead,” said the self-styled king of Latin trap, a musical style that many believe is the antipodes of what the movement for equity and freedom entails. female empowerment.

Anuel, however, calls for attention to be paid to his messages, not just the words.

And for a sample he refers to the song “Dictatorship”, in which a story of heartbreak hides behind explicit lyrics, but also “criticizes the controlling men and condemns the Venezuelan Government“.

“The goal I had with ‘Legends never die’ is to be as honest as possible about the man I am and who I want to be, without abandoning my sound and my style, which is what my fans expect,” he said.

It was a balancing act that this time made him release most of the songs alone, although there are collaborations with Myke Towers, Jhay Cortes, Eladio Carrión and even a surprise appearance at the end of Bad Bunny’s album.

Band ‘Los del Cinturón’ punish their victims with a strap, including grandmothers

5 films to reflect on the elimination of violence against women