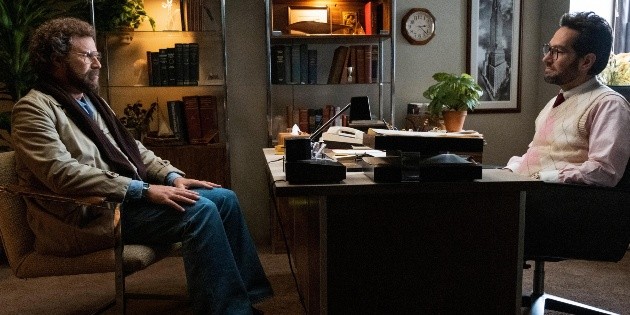 In its commitment to black and uncomfortable humor, the Apple TV + television platform this month presents “The Shrink Next Door”, a series starring Will Ferrell and Paul Rudd based on real events about a psychiatrist who took advantage of his millionaire patients.

The two actors decided to join forces when they discovered that they both wanted to bring the script of a 2019 podcast on their own to the small screen. told the story of Ike Herschkopf, an astute psychiatrist who came to move into the home of one of his patients and to control their business.

“Tragedy and comedy go hand in hand. This is a manifestation of that,” explained Ferrell himself, who plays Marty Markowitz, a neurotic businessman who ends up being the manipulated patient.

“The Shrink Next Door,” which just premiered on Apple TV +, is a dark and at times awkward comedy on the label of Georgia Pritchett, writer of formats like “Succesion” and “Veep.”.

The script details how a psychiatrist can use his skills to control the life of his patient and, at the same time, justify his intrusion into privacy as a sign of his involvement in therapy.

“This happened, this is true and can be seen as a cautionary tale about what to avoid in a therapy session, because If your therapist decides to move into your house and be your business partner … that’s a red flag, “said Paul Rudd ironically..

But in addition, the series humorously describes the insecurities and weaknesses of those who, facing the outside, show an image of a successful self-made man and inside desperately looking for a compass or some understanding.

“At first my character finds therapy very useful,” Ferrell added. “It is very nice to have someone fight for him in a way that he has never experienced before.”

Thus, the protagonist is sold as a single businessman from New York who, encouraged by people from his economic circle, goes to a therapist and ends up becoming something similar to his employee.

“It is rather a study of human fragility and how all of us, some more than others, are capable of being manipulated,” said the actor.

The complicity that the duo of Ferrell and Rudd emanate, in addition to their talents for comedy, move the script away from its murky premise and provide a light tone in the most uncomfortable moments.

In fact, although the fiction is based on a radio program of the “true crime” genre, the script prepared by Pritchett takes its own rhythm with the purpose of awakening complicity, even, by the villain of the plot.

“I play a therapist who has very unorthodox ways of helping people,” Ruud described. “But I think he really wants to help his patients. With Marty he develops a real 30-year friendship that then goes in pretty wild directions.”

“The Shrink Next Door”, whose first chapters are now available on Apple TV +, fits into the strategy of the technology company to offer humor, the genre that is giving the most joys in the television business thanks to “Ted Lasso”, winner of the Emmy to best comedy, and to the particular “Dickinson”.

5 films to reflect on the elimination of violence against women

Mobilizations called by the workers’ centrals in Bogotá end calmly