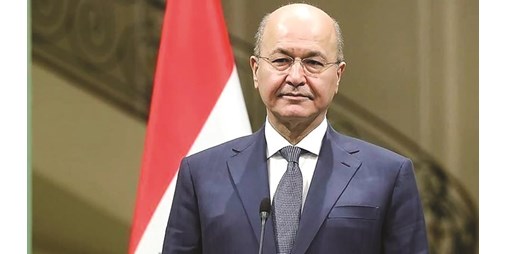 Iraqi President Barham Salih submitted his candidacy papers to take over the position of President of the Republic for a second term in conjunction with the issuance of an order by the Federal Court to temporarily stop the work of the Presidency of Parliament.

A source in the Iraqi parliament told Xinhua that “44 people have applied for the position of the republic so far.”

It was customary in the political system in Iraq after 2003, that the position of Speaker of Parliament for the Sunnis, the President of the Republic for the Kurds, and the Prime Minister for the Shiites.

Hoshyar Zebari, a member of the political bureau of the Kurdistan Democratic Party, led by Massoud Barzani, had nominated himself for the post of President of the Republic.

Judge Rizgar Muhammad Amin also announced his candidacy for the post of President of the Republic as an independent candidate.

The parliamentary election session witnessed disagreements and the withdrawal of a number of deputies, while the majority of deputies proceeded to elect a Presidency of Parliament headed by Muhammad al-Halbousi.

Another for the list: Bridge in the south of Bogotá that has a real death trap

“All cities are dreams” .. a poetic vision in travel literature | Gulf newspaper