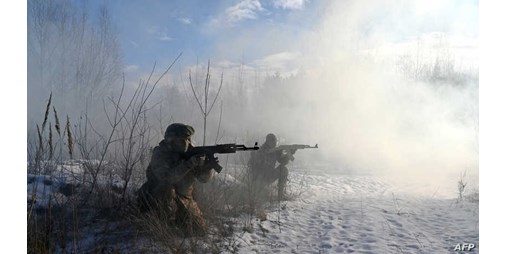 US Secretary of State Anthony Blinken said in a speech to reporters on Friday that providing a diplomatic solution with Russia to the Ukraine crisis “is still possible,” stressing that Moscow “justifies its aggression against Ukraine with lies.”

Blinken criticized what he described as a “provocative military buildup on the Ukrainian border,” adding that NATO had not made promises to Russia about its retreat from eastern European expansion, and that the alliance had the ability “to respond to any possible Russian aggression.”

And the US minister again urged Moscow to stop the escalation, and said: “We are ready to listen to Russia’s concerns and fears,” stressing that “it is difficult to reach a solution if Russia continues to escalate.”

And the US State Department announced in a statement, Friday, that Blinken called his Ukrainian counterpart, Dmitry Kuleba, about possible aid from the United States and its allies in response to the Russian military build-up, and the two ministers also discussed upcoming diplomatic talks with Moscow.

Blinken also confirmed that “no discussions on Ukraine will take place” without Kiev’s participation, a week before scheduled talks between Washington and Moscow on the crisis in this country.

Prior to that, NATO expressed its concern about the real danger of a conflict in Ukraine with the continued Russian military build-up on its borders, saying that it must be prepared for the failure of diplomacy, as announced by its Secretary-General Jens Stoltenberg.

At the conclusion of a video meeting with NATO foreign ministers, Stoltenberg said that “Russia’s military reinforcements continue in the vicinity of Ukraine and are accompanied by a letter that includes a threat from Moscow if it is not accepted. But it is unacceptable and the risk of a new conflict erupting, is real.”

For weeks, the European Union, the United States and Kiev have accused Moscow of deploying tens of thousands of soldiers on the Ukrainian border as part of a possible invasion.

US-Russian talks are scheduled to begin on Monday in Geneva, followed by a meeting between NATO and Russia and another meeting at the Organization for Security and Cooperation in Europe.

For her part, European Commission President Ursula von der Leyen stressed, with French President, Emmanuel Macron, Friday, the importance of Europe being a party to any negotiations between the Russians and the Americans on security in Europe.

“Whatever the solution is, Europe must be involved,” von der Leyen said at a press conference in Paris. “There will be no solution without the presence of Europe.”

For his part, Macron added, “The geopolitical situation in the region requires that Europe, the European Union, be able to put forward its vision of things, work and sit around the table with the parties concerned.”