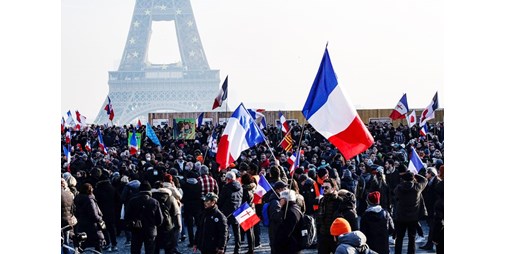 China announced yesterday that more than 90% of its population had received doses of the emerging corona vaccine, while the mutant Omicron caused the loss of many commodities in the American markets, and weekly demonstrations against restrictions were renewed in several capitals, including the French capital, Paris.

“More than 1.26 billion Chinese, or about 90% of the country’s population, have received doses of the Covid-19 vaccine” until yesterday, the Chinese “Xinhua” agency said yesterday, quoting a health official.

It quoted He Qinghua, an official with the National Health Commission, at a press conference in Beijing, that among them, more than 1.22 billion people have been fully vaccinated.

Also, nearly 2.93 billion doses of COVID-19 vaccines have been administered across the country.

In the context, the agency said that one person was also confirmed to be infected in the Haidian district of the capital, Beijing, and the southern Chinese city of Zhuhai suspended public transport lines yesterday after it announced that it had detected at least seven cases of the mutant Omicron, warning residents not to leave the city.

The coastal city on the border with the Macau region announced that the mutant Omicron was detected in a person with mild symptoms and 6 others who had no symptoms, after an extensive testing campaign after one infection was detected in a nearby city.

Officials in Zhuhai have asked residents to avoid leaving the city “unless necessary,” with those who want to leave the city to submit a negative result for a COVID-19 test conducted in the 24 hours prior to departure.

Meanwhile, Anadolu Agency announced that Turkey will no longer require people who have not been vaccinated to take a COVID-19 test before boarding planes, buses or other means of transportation or before attending events such as concerts, plays or movies.

The agency quoted the Ministry of Interior as saying that it will also not be necessary for government and private sector employees and unvaccinated school workers to take the BCR test.

Separately, Turkish Airlines CEO Bilal Ekci said on Twitter that the company would not order BCR tests on domestic flights.

In Australia, the authorities said that the country is likely approaching the peak of the mutated Omicron wave of the Corona virus, but warned that daily infections will remain close to record levels in the “next few weeks” after recording more than 100,000 cases for the fourth consecutive day yesterday. .

“We’re not done with that yet and I think the next few weeks will see a significant number of cases in Australia,” Chief Health Officer Paul Kelly told a news briefing, referring to the Omicron outbreak.

He said that the data from some states “leads me to believe that we are close to the peak of this wave in terms of cases.”

Meanwhile, the COVID-19 outbreak continues to disrupt supply chains as many stores in the United States face product shortages. Justin Ton says the situation is “not as dire as it was last Sunday, but there are still a lot of shelves empty.”

“For days in a row, there were no fruits or vegetables in the supermarkets,” says Ton.

The snowfall has exacerbated the problem of frequent shortages of goods since the beginning of the pandemic, in Washington and the neighboring states of Maryland and Virginia.

“There aren’t enough truck drivers and because they have strict regulations on hours and rest, they say ‘we’ll stop,'” says Cooper, an employee at Giant’s store in Bethesda. “They stop working and we are not supplied with goods.”

And when it snows, the situation becomes worse.

“Omicron is so infectious that it has had a nearly simultaneous effect across the United States,” says Patrick Benfield of Syracuse University.

A large number of employees in the food production chain are sick or in quarantine, completely disrupting the supply chain.

“We can’t produce as much food as we need,” says Penfield. There are not enough people to deliver it, and even when it is delivered to supermarkets, there is no one to unpack it and put it on the shelves.”

This phenomenon is widespread throughout the country, but is more pronounced in areas that also experience bad weather, such as the Washington area.

‘El mudo’ fell, who would have used a stone to rob a subject in Bogotá