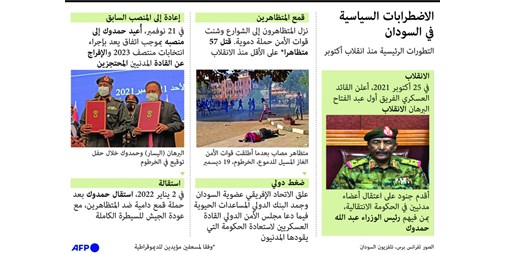 By stepping down recently, Sudanese Prime Minister Abdullah Hamdok cleared the scene for the military in the country mired in violence since the coup that ousted civilians from power in October 2021, while fears of a return to an authoritarian regime are rising.
The unfortunate outcome since the coup d’état of the army chief, Lieutenant General Abdel Fattah al-Burhan, on October 25, has reached 57 protesters dead, according to the central pro-democracy Doctors Committee.
A decree issued by Al-Burhan raises fears of more violence, as it guarantees impunity for the security forces and grants them all powers under the provisions of the “emergency law” inherited from the era of former President Omar al-Bashir, who was overthrown in 2019 by the army under pressure from the street.
At the end of November 2021, after a month of house arrest, Hamdok returned to his position after an agreement with Al-Burhan, but he has been “paralyzed” and “unable to accomplish anything” since then, in the words of Magdy El-Gizouli, a researcher at the Rift Valley Institute.
On the one hand, “only the soldiers are in command”, and on the other hand, “the demonstrators who will continue to take to the streets will face more violence,” al-Gizouli told AFP.
He believes, “It is an open confrontation between the security forces and the former regime on the one hand, but this time without al-Bashir, and on the other hand, a leaderless movement in the street, as it is based on youth activism.”
Al-Bashir, who is being tried in various cases, is still in prison since his ouster. But many figures in his regime are still in power, among them Lieutenant-General Al-Burhan.
“Hamdok’s resignation deprives the generals of their confrontation and clearly shows that the coup is nothing but a return to Bashir’s military policy,” tweeted Kholoud Khair, a specialist in Sudan affairs at Insight Strategy Partners.
On October 25, Al-Burhan extended his term of office for two years, which led to the downfall of any possibility of transferring power to civilians before the end of the transitional period that he promised would take place in July 2023 through elections.
After two months, the security forces were allowed through an “emergency decree” to “enter any building and search it and search the people in it” and “carry out surveillance and confiscation operations,” and that was by informing the Sovereignty Council only, which is headed by Al-Burhan himself, which means ignoring the judiciary.
In addition, members of the security services, the army, police, intelligence and Rapid Support Forces, accused of committing abuses in the Darfur region of western Sudan, enjoy impunity and cannot be interrogated.
Al-Taher Abu Haga, an advisor to Al-Burhan, said that these arrangements are “natural given the current circumstances,” stressing that “some parties are exploiting the atmosphere of freedom to create chaos.”
But for the opponents, the killing of 57 demonstrators and the wounding of hundreds, in addition to the arrests, is evidence that this text reinforces repression in a country that, since its independence 65 years ago, has known only a few years outside of military rule.
Abroad, the reactions were modest, as the West threatened to withhold support for any government that does not have civilians, and the United States only called on “Sudanese leaders to put aside their differences in order to ensure the continuation of civilian authority,” while Britain said it was “very sad” for Hamdok’s departure. UN envoy Volker Perthes said he “regretted” his departure but “respected” his decision.
“The longer Americans and Europeans wait to announce sanctions for the actions of the generals, the more they can consolidate their economic and political power at the expense of the Sudanese,” warns John Prendergast of the think tank The Sentry.