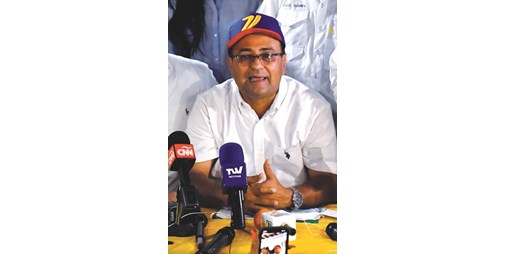 The Venezuelan opposition achieved a historic victory in the elections held yesterday to choose the governor of Barinas state, a position held by the family of former President Hugo Chavez since 1998, at the end of a vote that the authority tried to do everything in its power to extract victory after the judiciary canceled the first elections held in November 2021. And opposition candidate Sergio Garrido, who is not widely known, replaced opposition candidate Freddy Soberlano, who had been in the lead when the judiciary canceled the ballot and declared it ineligible.

According to the results announced by the National Electoral Commission yesterday evening, Garrido won a comfortable victory, with 55.36% of the vote, compared to 41.27% for Jorge Arreasa, the candidate for the authority.

In doing so, decades of the Chavez family’s dominance of the governorship of this strategic state ends. The family rule began with the president’s father, Hugo de los Reyes Chavez (1998-2008) and continued with his two brothers, Adan (2008-2016) and Argenes (2017-2021).

Arriasa, Chavez’s son-in-law, wrote on Twitter, acknowledging the defeat, that according to the information he had, “we didn’t succeed in the winning goal.”

Arreasa, a former Venezuelan vice president and foreign minister and a prominent figure in the Chavista movement, was transferred to this western state to replace outgoing governor Argenes Chavez, who abandoned his candidacy for re-election after the first election cycle.

COVID: This is what you will need to go to a concert in Jalisco

Omicron puts pressure on European health care systems, as schools reopen in several countries despite the outbreak
Leave a Comment