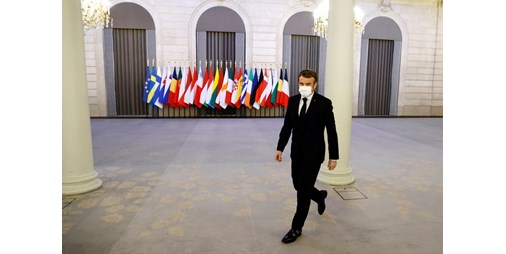 The European flag flew under the Arc de Triomphe in Paris to celebrate France’s assumption of the rotating presidency of the European Union, but for less than two days, because it was removed as a result of the controversy launched by the right and the extreme right opposing President Emmanuel Macron, which reflects the dominance of history and identity on the electoral campaign.

The raising of the European flag in this place was widely criticized. After his disappearance, the French government said that it was originally scheduled to raise it for only two days, which the opposition doubts.

Under the Arc de Triomphe are the remains of the “Unknown Soldier”, the symbol of soldiers killed during World War I. Every evening a torch is lit in the place to honor them. National Front President Marine Le Pen said that raising the European flag there is an “attack on the identity of our homeland.”

Another candidate from the far-right, Eric Zemmour, criticized the raising of the European Union flag less than a hundred days before the presidential elections.

As for Jean-Luc Melenchon, the candidate of the extreme left, he denounced a “communicative whim with state symbols.”

Right-wing candidate Valerie Pecres said that “Emmanuel Macron has a problem with the history of France,” noting that she would have preferred to see the French and European flags fly side by side, as happened during the former French presidency of the European Union during the era of Nicolas Sarkozy.

The debate exposes the sensitivities around questions of national identity and history within a section of public opinion concerned about European integration, immigration and the re-questioning of French history.

66% of the French support the idea that “France’s identity is disappearing,” according to an opinion poll conducted by the French Institute for Public Opinion in early January, while 82% of the respondents believe that “there is an exploitation of issues related to identity by some political figures.” They consider the main threats to their identity to be “economic weakness”, “declining industry” and “unemployment”.

Glorification of a ‘perfect past’

France has been witnessing a debate over its history and past for months, sometimes caused by statements by Emmanuel Macron. In April 2021, the French president called for “in a way, our history” to be “disassembled” in order to better face its current repercussions, most notably racism and discrimination. His statements at the time provoked responses from the right and the extreme right, and Marine Le Pen accused him of “repeating acts of repentance.”

Zemmour, who presents himself as the last defender of an ideal and disappearing France, has repeatedly said that the Vichy era saved Judea, which historians disagree with.

Garrig says that Eric Zemmour’s electoral program, which “glorifies a past that has been elevated to idealism”, is “reactionary” and reminds of the rhetoric of the “extreme right at the beginning of the twentieth century.”

According to political analyst Pascal Perino, “the left has been silent” for decades in the face of the right and the extreme right, which focus the debate on national identity.

Nicolas Sarkozy’s 2007 campaign centered on this topic, and he created the Ministry of Immigration, Integration, National Identity and Solidarity, which was strongly criticized by the left, until it was abolished in 2010 on the basis of the term “national identity.”

“It is very difficult to determine Macron’s position on this issue,” Perino added. “In 2017, most of his voters were from the left, but today he is on the right. We know that he moved, but we do not know where he arrived.”

On the left, Jean-Luc Melenchon is the only one taking part in the historical debate, criticizing the “colonial spirit” of the French authorities during a visit last December to the French Caribbean island of Guadeloupe, where there was violence against health restrictions against the outbreak of Covid-19.