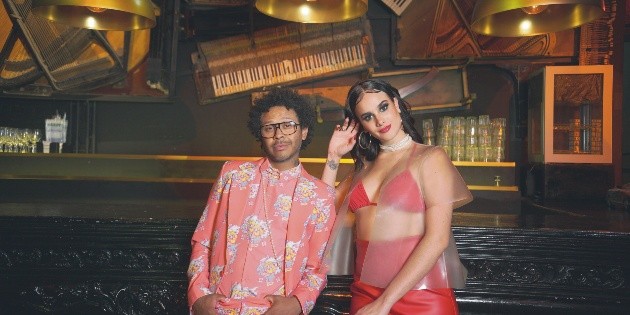 The musical surprises with Kalimba do not stop. Before the end of 2021, the singer-songwriter gave small previews of what will be his new unreleased production “6PM”; and now offers a clearer idea of ​​his new musical facet with the launch of “Cínico”, a song that has a special debut: on the one hand by adding the voice of actress Gala Montes and on the other hand, it explores the cumbia genre with a very urban touch.

In an interview with EL INFORMADOR, Kalimba points out that 2022 will be significant after a little over a year and a half of being absent from the stages, so the launch of “6PM” and its respective tour will allow him to show his fans different proposals, which they range from his characteristic ballad and R&B style to the “cumbiatón”, a mix that has cumbia and reggaetón as its main ingredients.

Kalimba took advantage of the pause due to the pandemic to shape “6PM”, his sixth solo production and with which he surprises the public with unexpected duets and unheard fusions in his career, anticipating that in this new stage he will have as special guests various pop and urban voices from Puerto Rico, Peru and two Mexicans.

“When they ask me where my voice came from, I say gospel, R&B, blues, black music, that’s the label, but for another genre I have to study it to be able to stick and sound like that, without sounding like that either. a copy (…) we will be releasing surprises for the fans, but there are collaborations, there are ballads of love and heartbreak, other very lively songs and another Colombian touch, it is an album that has allowed me to explore other genres”, points.

Kalimba recounts that although he is very clear about the spirit that would reign in his new album, being in the recording studio with the ArkeRecords label, by chance he heard the bases that the producer Luis Reyes made for what would be “Cínico”, and although the subject was thinking for another artist, Kalimba was amazed with the proposal and requested that the song remain on his album to compose the lyrics and be the one who gave voice.

“’Cínico’ is a pretty handsome song, cumbia has always moved Latin America a lot, I know it will make us all dance. The collaboration with Gala excites me a lot (…) this song was originally intended for someone else, the base had been made, I was in the studio when I heard it and I said it was wonderful, I asked if they would leave it to me and I did the lyrics, I wanted to sing it with someone else”.

With the expectation that “Cínico” would be recorded as a duet, Kalimba confesses that various singers came out among the proposals, however, he emphasizes that being in the television contest at the same time “Who is the Mask?” -of which he was the winner by giving life to the mysterious ‘Apache’- was amazed by the voice of his partner, the actress Gala Montes, who hiding her identity in the character of “Gypsy”, He captivated the public with his songs and encouraged Kalimba to investigate if it would be possible to undertake a project with the protagonist of “La mexicana y el güero”.

“For me it was a surprise, as for everyone, to discover that under ‘Gitana’ there was a very talented Gala Montes (…) when I discovered her I was amazed, not only because of her talent, she has the ability to present, to to interpret, to make the people who are watching her be captivated by her talent”, indicates Kalimba, who invited Gala to also participate as a composer of this song.

“Gala came with a lot of energy for the video, it’s very nice to see a person who has his feet on the ground, but at the same time is to be such a rock star. She is very calm, simple, very polite, and when she goes on stage she becomes this wonderful star.”


With the calendar ready

Shortly before the end of 2021, Kalimba had the opportunity to offer his first concert with the concept of the 6PM Tour, and given the good response he has also had on digital platforms, he already has a tour of Mexico and various Latin countries on his agenda. like Cuba, where he will arrive for the first time with his show.

“We already did the first concert to close last year, I already tried ‘6PM’ in front of the public and I can tell you that what you will see is that you will enjoy this tour that is very lively with ballads, with acoustic, but it has a lot of Kalimba”.

The singer-songwriter shares that he also resumed the rehearsals of “José, el soñador”, a theatrical production that in the coming weeks will return to the billboard in Mexico City to reach other venues in the country, and with which he intends to carry out a special project with the musical repertoire that has accompanied him in this production.

A confined Chinese woman… in the middle of a date