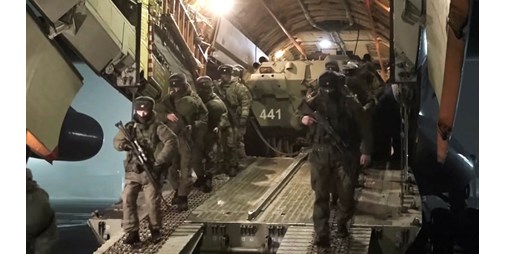 The crisis in Kazakhstan joined the tension factors between the United States and Russia on the eve of the talks scheduled for tomorrow between them on Ukraine, which reached a media exchange, as Moscow considered the statements of US Secretary of State Anthony Blinken about the crisis as “blunt”.

Moscow condemned Blinken’s statements, who stressed that removing Russian forces from Kazakhstan would be “extremely difficult.” Russian Foreign Ministry spokeswoman Maria Zakharova said in a blog post on her account on the Telegram app that Blinken “jokingly joked in his usual blunt way about the tragic events in Kazakhstan.” .

Zakharova noted that Blinken commented during a press conference on the “legal response by the CSTO to the appeal of the government of Kazakhstan to help it ensure security” in the country, where the US Secretary of State stated, “There is a lesson from history: if the Russians enter your house, it will be difficult to force them to leave.”

“If Anthony Blinken is very fond of history lessons, he should know this: if Americans enter your house, it will be difficult for you to survive and not be robbed or raped,” Zakharova said.

But this matter teaches us not only the past history, but the past 300 years, since the establishment of the institutions of the American state. The North American Indians, the Koreans, the Vietnamese, the Iraqis, the Panamanians, the Yugoslavs, the Libyans, the Syrians, and the many miserable peoples who were not fortunate enough to see these uninvited guests in their homes can tell us much about it.”

The Kremlin also announced yesterday that Russian President Vladimir Putin and his Kazakh counterpart had a “long” telephone conversation and discussed the situation in Kazakhstan.

In this context, the authorities arrested the former head of the security service in Kazakhstan Karim Masimov on charges of treason after his dismissal yesterday, and the “National Security Committee” (KNP) said that its former director, 56, was arrested after the start of an investigation on charges of “high treason”.

In addition, former Kazakh President Nursultan Nazarbayev called on the people to support the government to confront the crisis the country is going through, according to what his spokesman announced yesterday.

His spokesman, Aidos Okipay, wrote in a tweet that Nazarbayev “calls on all citizens to rally around the President of Kazakhstan to allow him to overcome this crisis and ensure the unity of the country.”

Okebay denied rumors about the former president’s departure from the country, and said that the latter calls on the Kazakhs to support the government.

On the ground, the agency “Sputnik Kazakhstan” said that the city of Almaty witnessed an exchange of fire yesterday between security forces and militants, amid a heavy security deployment and the continuation of the anti-terror operation.

“Yesterday morning, shooting continued in the center of Almaty, and the anti-terror operation in the city continues,” the agency said.

On the other hand, the media reported the closure of the airport in the city of Alma-Ata until the 10th of this month.

Official TV reported yesterday, official figures, according to the arrest of more than 4,400 people and the death of more than 40 others due to the unrest that the country has been witnessing for days. The security forces also found a cache of weapons in the Zambia region, including several machine guns and pistols.

The army continued to guard the square near the mayor’s office, which was stormed by demonstrators and set fire to it, and fired warning shots whenever pedestrians slowed to respond to warnings to stay away.

Leonid Kiselev, 68, said his car came under fire when he was driving near the city center, pointing his finger at a hole he said a bullet had made in the trunk of the car. “It was calm, so I drove here,” he said.

This came as Russian military cargo planes continue to transport peacekeeping forces of the Collective Security Treaty Organization (CSTO) from the airports of the Moscow, Ivanovo and Ulyanovsk provinces to Kazakhstan.

The Russian Defense Ministry stated that military aircraft are transporting units of paratroopers from peacekeeping forces to the airports of “Alma-Ata” and “Getigin” in the Republic of Kazakhstan.

In a related context, talks between US and Russian diplomats will begin in Geneva tomorrow after a weeks-long standoff over Russia’s deployment of troops near its border with Ukraine, with veteran envoys from both sides trying to create a crisis.

“Russia and NATO may discuss the creation of a buffer zone along the line of contact between the two sides, which may include restrictions on the deployment of troops and weapons during the talks in Brussels,” said Andrei Kortunov, director of the Russian International Affairs Center.

Kortunov added – in a statement carried by the Russian news agency “TASS” yesterday – that this idea revolves around the hallway of NATO from afar, but I would like to include a serious discussion about creating a buffer zone along the line of contact between Russia and the alliance with the establishment of a special military activity regime in this region. Not to deploy some types of weapons there and restrictions on military exercises.

He pointed out that Moscow had expressed this idea earlier, but it was met with a negative reaction from the Baltic countries, as he put it, explaining that Russia and NATO may also discuss restoring the Russia-NATO Council in the context of multi-level contacts between the military of both sides.