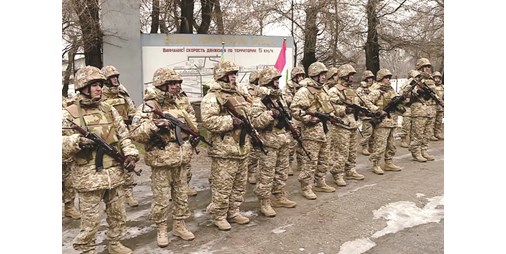 Kazakh President Kassym-Gomert Tokayev visited Almaty yesterday for the first time since the protests that swept the country in which dozens were killed and thousands arrested, and promised to repair the damage in the country’s economic capital.

“The task now is to rebuild the city in the shortest possible time, and I have no doubts that the city will be reconstructed,” he said during a government meeting, according to a statement issued by the Kazakh presidential office. The Kazakh president expressed his gratitude to the Russian and allied forces, which he considered “played a very important role in stabilizing the country’s situation.” “Without any doubt, it was of great moral importance to deter the attack of terrorists and bandits. We can consider the mission very successful.”

Tokayev met, according to local media, with relatives of the security personnel who were killed during the riots, and the wounded were returned to hospitals.

For his part, the new Prime Minister of Kazakhstan, Ali Khan Ismailov, instructed the Ministry of Economy to formulate a draft government work program for the current year by March 20, and instructed to draw up proposals for reforming the armed forces and intelligence.

The recently appointed Ismailov noted that the head of state, Kassym-Jomart Tokayev, instructed to formulate a government work program for 2022 within three weeks.

According to Ismailov, the actions planned in the program should be feasible this year, and work at a high level of quality. He said, “I instruct the Ministry of National Economy with state agencies and institutions to draw up a draft program and submit it to the government by January 20.”

On the other hand, Industry Minister Kayrbek Uskinbayev said that Almaty airport is technically ready to resume work.

For its part, the National Bank, the Financial Supervision Agency and the Financial Market Regulatory and Development Agency adopted an order aimed at strengthening control over the illegal withdrawal of funds from the country.

In the context, news reports in Kazakhstan said yesterday that another 1,700 people were arrested in Almaty, the country’s largest city and the epicenter of the recent unrest. The reports described the detainees as “saboteurs and criminals.”

Yesterday, the news channel “Asia News” reported that the additional arrests, which the authorities reported that they had made in the city of Almaty, brought the total number of arrests to about 12,000 people.

On the other hand, the Russian Defense Ministry announced the evacuation of 2,095 Russian and foreign citizens from Kazakhstan to Russia by military transport planes of the Russian Aerospace Forces, and said that the evacuees are Russian citizens who went to Almaty for the New Year holidays in Tourist trips, and as a result of the aggravation of the situation and the closure of Almaty International Airport, Russian tourists stayed in the city’s hotels, noting that these citizens appealed to the leadership of the Russian peacekeeping forces with a request for assistance in returning them to Russia.

In addition, the United Nations called on the authorities in Kazakhstan to promote and protect human rights and fundamental freedoms in the context of countering terrorism, calling for prompt, independent and impartial investigations into the killings, which will include whether security forces have used unnecessary and disproportionate force.

According to the United Nations Information Center, a spokeswoman for the Office of the High Commissioner for Human Rights, Liz Throssell, stressed that under international law, people have the right to peaceful protest and the right to express their opinions. They should not be detained merely for expressing their opinions, and she stressed the need for all detainees to have access to lawyers, as part of their basic human rights.

Liz Throssell also stressed the importance of the Ombudsperson in Kazakhstan being able to fully fulfill her mandate regarding the so-called National Preventive Mechanism, which is related to the issue of torture, by visiting places of detention.

In the same context, independent human rights experts called on the authorities in Kazakhstan and the security forces to “stop their unrestricted use of force, including lethal force” directed against protesters, and called for independent and human rights-based investigations into the way the government has used force in recent days. in order to quell the protests. In a statement, the experts said they were very concerned that the President of Kazakhstan had reportedly given orders to the security forces and the army to “open fire with lethal force” on the demonstrators, whom he described as “bandits and terrorists”.

The killing of an elderly Palestinian man, who was handcuffed and assaulted by the occupation soldiers