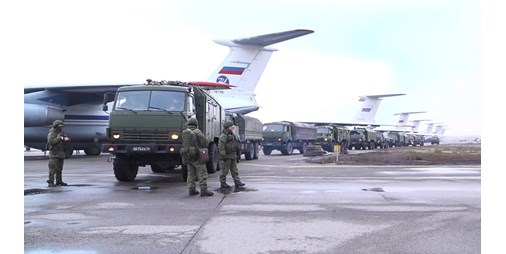 Russian forces took over the protection of vital facilities in Kazakhstan, where the number of detainees reached more than five thousand people, in addition to the killing of 164 people due to the unprecedented protests taking place in the largest Central Asian country. The Kazakh Interior Ministry announced that at least 5,800 people had been arrested in 125 separate investigations.

The media quoted the ministry as saying that the initial estimate of the value of the material damage caused by these disturbances amounted to about 175 million euros. More than 100 stores and banks were looted and more than 400 cars were destroyed, according to the same source. “The situation has stabilized in all regions of the country,” Interior Minister Erlan Turgombayev said. And the anti-terror operation continues to restore order.”

The Kazakh Ministry of Health also announced, in a statement reported by the Russian “TASS” news agency, that “during the recent bloody unrest, 164 people were killed in several cities, including about 103 in the city of Almaty.”

Relative calm returned to Almaty, the country’s economic capital, while policemen fired in the air from time to time to prevent residents from approaching the city’s central square, according to Agence France-Presse. In a timid sign that the situation is returning to normal, about thirty stores reopened their doors in Almaty yesterday, according to what the media in Kazakhstan reported, at a time when residents are expressing concern about a shortage of materials.

And formed long queues in recent days in front of gas stations, according to AFP journalists.

As for Almaty Airport, which was occupied by the demonstrators for a short period, it will remain closed “until the situation stabilizes,” according to the authorities, on Sunday. He was supposed to resume his activity Monday.

In this context, the Russian Defense Ministry announced that the Russian paratroopers of the peacekeeping forces of the Collective Security Treaty Organization have begun to protect vital installations in Kazakhstan.

The ministry said, in a statement, that the Russian units of the peacekeeping forces, which were flown on military transport planes from Russian airports, began carrying out their tasks after being briefed on the situation in Kazakhstan.

The RT Arabiya website quoted the ministry as saying that the Russian paratroopers were tasked with protecting vital facilities, infrastructure and social institutions in Kazakhstan.

On the other hand, the White House denied any US connection to the protests in Kazakhstan, and a senior official in the administration of US President Joe Biden said during a conference call, “We have nothing to do with the developments of events there, this question is not for the United States.”

In addition, the European Union yesterday strongly condemned the violence in which dozens of people were killed in Kazakhstan and the military support from abroad, urging support providers to respect the sovereignty and independence of Kazakhstan.

“The sovereignty and independence of Kazakhstan, as well as the fundamental rights of all citizens must be respected,” said Josep Borrell, EU High Representative for Foreign and Security Policy, in a declaration on behalf of the member states, referring to the intervention of the Russian-led Collective Security Treaty Organization in Kazakhstan.

In the game … Scammers would be offering false job offers