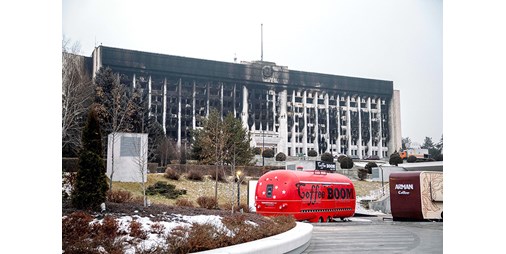 The King of Bahrain, King Hamad bin Isa Al Khalifa, affirmed Manama’s stand with Kazakhstan and its support for its efforts to maintain its security, stability and the safety of its citizens, expressing his wishes to Kazakhstan and its friendly people for continued security and prosperity.

The official Bahrain News Agency (BNA) stated that this came during a phone call yesterday with the President of Kazakhstan, Kassym-Jomart Tokayev, in which Tokayev praised Bahrain’s role in strengthening the ties of brotherly friendship between the two countries.

The Crown Prince of Abu Dhabi expressed his confidence in the ability of the government and the people of Kazakhstan to “pass this difficult period as soon as possible.”

For his part, President Tokayev expressed his thanks and appreciation to Sheikh Mohamed bin Zayed for his stance and support for Kazakhstan, noting the “deep relations between Kazakhstan and the UAE in various fields.”

Meanwhile, Russian President Vladimir Putin affirmed yesterday that Russia will not allow the situation in the CSTO member states to be destabilized and to organize “color revolutions” in them. .

In his speech during a virtual summit held by the leaders of the member states of the organization, which includes Russia, Belarus, Kazakhstan, Kyrgyzstan, Tajikistan and Armenia – and the facts of which were reported by Russian television – the events that took place in Kazakhstan were described as “aggression by terrorist groups that received training abroad” and that the goal of sending the organization’s forces To Kazakhstan is represented in “erecting a dam against terrorists, thieves, bandits and other criminal elements who sought to undermine state institutions, disrupt their tasks and destabilize the internal situation.”

He stressed that the forces of the Collective Security Treaty Organization in Kazakhstan “will work there for a limited period according to the discretion and vision of the Kazakh leadership,” adding that “they will be withdrawn from Kazakhstan as soon as the completion of their tasks.”

He stressed that these forces “only guard strategic facilities and infrastructure and do not participate in security operations against terrorists, which are carried out by the security forces and the Kazakh army.”

He urged the member states of the organization to develop mechanisms to counter external interference, warning of the dangers of using cyberspace in the processes of forming sleeper cells and dragging the country’s citizens to engage in illegal activities.

For his part, the Kazakh president said in his intervention at the summit that the violence and riots that took place in his country “was an attempt to carry out a government coup.” He pointed out that “despite the authorities’ response to the protesters’ demands, the terrorist groups moved according to a tight plan and simultaneously in all regions to commit acts of looting and violence with the aim of undermining the constitutional order, destroying state institutions and seizing power.”

The government of President Tokayev received strong support from China, which confirmed its readiness to support Kazakhstan “with all strength” in maintaining stability and stopping violence in the largest Central Asian country.

On the ground, the authority in Kazakhstan said yesterday that the number of detainees has risen to nearly 8000 people since the protests began.

The Kazakh Interior Ministry stated that 7,939 people were arrested across the country, and the National Security Committee and the Counter-Espionage and Counter-Terrorism Agency reported that the situation in the country was “stabilised and under control”.

Rebelde: Poncho Herrera advises to review well their contracts to the new cast of the series

Camila Cabello and Shawn Mendes could be together again – LaBotana.com
Leave a Comment