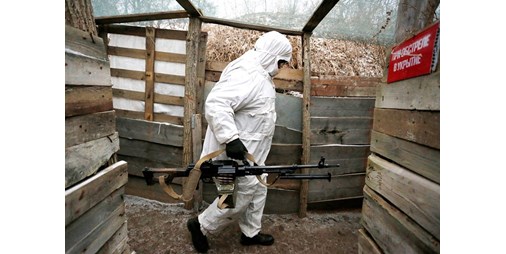 Tensions have returned between Russia and the West on the Ukrainian front, after the situation in Kazakhstan has calmed down, as Moscow rejected US accusations yesterday of trying to fabricate provocations to use it as a pretext to invade Ukraine, at a time when Washington threatened a painful response to Russia and 18 scenarios.

Russia yesterday dismissed what it called “baseless” allegations by US officials that it was preparing a so-called “false flag mission” in eastern Ukraine, using a group of secret special agents.

This came in response to the US government’s accusation that Russia was planning to use secret agents as a pretext to invade Ukraine, in the latest escalation of tensions between the two powers.

“We have information indicating that Russia has already pre-positioned a group of secret agents to carry out Operation False Flag in eastern Ukraine,” White House spokeswoman Jen Psaki said, presenting what she described as intelligence obtained by Washington.

“Clandestine agents are being trained in the arts of war in cities and in the use of explosive devices to carry out sabotage operations” against proxy forces for Russia, she added.

And Psaki added that US intelligence believes that Russia can start these operations weeks before the military invasion, which may start between mid-January and February.

Russia has previously denied any plans to invade Ukraine and quickly denied recent US statements, which Kremlin spokesman Dmitry Peskov described as “unfounded.”

The Russian embassy in Washington described the US government’s accusations as “appalling” and added: “As usual, no evidence was presented.”

The embassy called on the US side to stop the “continuous information pressures” and take action. “Russia is against war,” she said. We support a diplomatic solution to all international problems.” According to intelligence information from Washington, there are indications that “Russian influencers have already begun to fabricate Ukrainian provocations, in the state and on social media, to justify Russian intervention and sow divisions in Ukraine.”

In anticipation of the supposed attack, US Deputy Secretary of State for Political Affairs Victoria Nuland said that the administration of US President Joe Biden had prepared 18 possibilities to respond in the event of a “Russian invasion” of Ukraine.

“In principle, I will not talk about the 18 different scenarios,” Nuland added, in an interview published yesterday in the British newspaper “Financial Times”. I will only say that we, along with the allies, are prepared to inflict acute pain quickly if Russia takes any (aggressive) step.”

Nuland stressed that the sanctions imposed by the United States and European countries on Russia may differ from each other.

The North Atlantic Treaty Organization (NATO) announced its intention to sign an agreement with Ukraine to enhance their cooperation in combating cyber attacks, hours after government websites in Ukraine were subjected to a major cyber attack.

The deal, to be signed “in the coming days”, centers on granting “Ukraine access to a NATO platform for sharing information on malicious programs,” NATO Secretary General Jens Stoltenberg said in a statement.

This comes after Ukraine revealed that a major cyber attack had targeted a number of government websites. Kiev announced yesterday that it had “initial indications” of the possible involvement of Russian intelligence services in the attack.

“Ukrainian Security Service has obtained initial indications that groups of hackers linked to Russian intelligence may be behind the major cyber attack” against 70 government websites in the past, Ukrainian Foreign Ministry spokesman Lej Nikolenko said on Twitter.

For his part, Andrei Ermak, head of the Ukrainian presidential office, confirmed that Western and Ukrainian intelligence believed that the cyber attacks were part of a scheme aimed at “destabilizing Ukraine.”