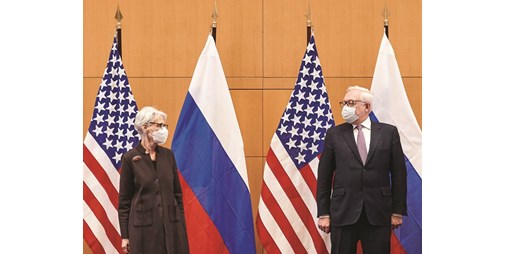 Pessimism clouded the negotiations between the United States and Russia in Geneva yesterday, in an effort by Washington to prevent a new Russian invasion of Ukraine without bowing to the major security demands of the Kremlin.

Even before negotiations began, those concerned significantly lowered expectations, as Russian Deputy Foreign Minister Sergei Ryabkov expected diplomacy to fall by a knockout blow from the first meeting, while US Secretary of State Anthony Blinken, in an interview with CNN, expressed his belief that Negotiations “will not yield any breakthrough.”

The talks between US Deputy Secretary of State Wendy Sherman and Ryabkov began at the headquarters of the US diplomatic mission in Geneva, at a time when tensions reached a degree unprecedented since the end of the Cold War three decades ago. The two rarely exchanged glances while taking pictures before the meeting.

“The United States will listen to Russia’s concerns and relay ours,” Sherman wrote in a tweet from Geneva before the meeting, adding that there was no chance for a discussion about Europe’s security in the absence of other allies. The discussion will move to later stages of meetings in Brussels and Vienna this week.

Against the backdrop of Russian masses near the border with Ukraine in preparation for what Washington and Kiev say is a possible invasion, eight years after Russia seized Crimea from it, and before tensions escalated in Kazakhstan, Russia made a huge set of demands, including a ban on NATO expansion. And put an end to its activities in the countries of Central and Eastern Europe, which joined it after 1997. But Washington and the Alliance rejected a large part of the Russian proposals, describing them as not representing a basis on which to build.

In an introductory meeting with Ryabkov yesterday, Sherman stressed Washington’s commitments to sovereignty and territorial integrity and “the freedom of sovereign nations to choose their own alliances,” the State Department said.

The Russian Interfax news agency quoted Ryabkov as telling reporters that his meeting with Sherman was “complicated, but also practical.”

Ryabkov likened the situation to the Cuban missile crisis in 1962, when the world was on the brink of nuclear war between the United States and the Soviet Union.

Reuters quoted an informed source that Washington is discussing with allies and partners in Europe and Asia a set of trade restrictions against Moscow if diplomacy fails and Russia takes hostile moves against Ukraine.

The restrictions could affect important Russian industrial sectors, including defense and civil aviation, and could harm Russia’s ambitions to develop high technology, such as artificial intelligence or even consumer electronics.

On the other hand, NATO Secretary General Jens Stoltenberg, who will meet with the Russian team in Brussels tomorrow, said that Russia and the West may not be able to resolve all issues this week, but they may find a way out to avoid conflict.

“What we hope for is success in agreeing on a way forward, in holding a series of meetings, and we are able to agree on a path,” Stoltenberg added.

Ukraine’s deputy prime minister, Olga Stevanishina, who was at Stoltenberg’s side, said Russia’s demands “cannot be viewed from the angle of being a negotiating position”.

She told reporters that “the aggressor has no right to set conditions” at a time when Russian tanks are standing near the Ukrainian border.