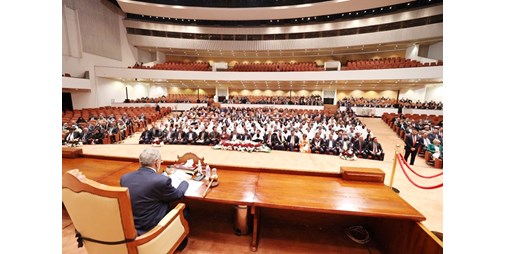 Yesterday, the new Iraqi parliament held its first session, nearly three months after the legislative elections, the results of which were issued by the Sadrist movement led by Shiite cleric Muqtada al-Sadr, with 73 seats, amid negotiations and intense political meetings to discuss the form of the new government.

Parliament failed during its first session to elect a speaker, and the session was suspended for further consultations in this regard, according to Iraqi lawmakers.

The first parliament session witnessed a state of chaos after it failed to choose a speaker, while the interim parliament speaker, Mahmoud al-Mashhadani, was transferred to the hospital, and the session was adjourned.

Chaos arose in the session after the Shiite coordinating framework announced that it had submitted to the interim parliament speaker what proves that it is the largest bloc in the parliament, which angered the Sadr bloc, and the media transmitted recordings of exchanges and clashes between the deputies.

Later, Parliament returned to resume its session after Khaled Al-Daraji assumed the interim presidency, where he announced the victory of its former president, Muhammad Al-Halbousi, for the second time and from the first session with a clear majority.

The Kurdish blocs in Parliament also nominated Barham Salih for the position of President of the Republic in a second round as well.

And the Speaker of Parliament, Mahmoud Al-Mashhadani, opened yesterday the first session of the House of Representatives, in the presence of 325 deputies out of a total of 329, according to what the official Iraqi News Agency (INA) reported, quoting the Parliament’s media department.

She added that the opening ceremony of the fifth parliamentary session witnessed the attendance of all the representatives of the political blocs, noting that they held individual meetings prior to the first parliament session.

The agency stated that “the deputies of the Sadrist bloc held a meeting yesterday in the House of Representatives,” explaining that they “weared shrouds during the meeting.”

On the eve of the first session of the new parliament, elements of the armed wing of the Sadrist movement, Muqtada al-Sadr, deployed in Baghdad yesterday evening, and the “Russia Today” news website reported that Muqtada al-Sadr’s “Peace Brigades” forces had suddenly deployed in some areas of the Iraqi capital.

The news site added that information indicated that this deployment came “in anticipation of any emergency.”

In the meantime, a prominent leader of the Sadrist movement was assassinated in Maysan province, southern Iraq.

The Iraqi (Shafaq News) news agency quoted an informed source as saying that “the body of (Muslim Abu al-Rish), a prominent leader in the Sadrist movement, was found late yesterday evening, dumped in the Chechnya area, bearing 11 bullet wounds in separate parts of the body.”

According to the source, Abu al-Rish is the main suspect in the assassination of Wissam al-Alaywi, a leader in “Asa’ib Ahl al-Haq” led by Qais al-Khazali, one of the popular mobilization factions.