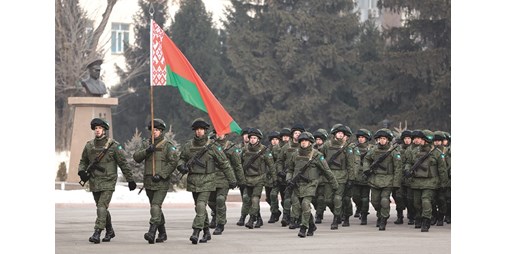 Russian-led forces began their withdrawal from Kazakhstan yesterday, which were sent to support the authorities in the face of unprecedented “riots” that rocked the former Soviet republic, the Russian Defense Ministry announced.

In the morning in Almaty, the economic capital of Kazakhstan, an official ceremony was held for the soldiers who participated in the operation under the banner of the Collective Security Treaty Organization, the military alliance led by Moscow, according to Agence France-Presse.

“The peacekeeping operation has ended, the tasks have been accomplished,” said Russian General Andrei Serdyukov. Serdyukov is the commander of a CSTO battalion of 2,030 soldiers from Russia, Belarus, Armenia, Tajikistan and Kyrgyzstan, which was sent to the former Soviet Central Asian republic on Jan. 6 and must finish its withdrawal before Jan. 22, according to the CSTO and Kazakh authorities.

According to the Russian Ministry of Defense, these forces “prepared their military and technical equipment for transfer to Russian Air Force planes with the aim of returning to their permanent base.”

“According to the plan drawn up by the Collective Peacekeeping Forces Command of the Collective Security Treaty Organization and the Ministry of Defense of Kazakhstan, the handover of vital facilities guarded by peacekeepers to the country’s law enforcement agencies has begun,” the statement said.

Russian President Vladimir Putin discussed by phone with his Kazakh counterpart Kassym-Jomart Tokayev the latest developments in the situation in Kazakhstan.

A statement by the Kremlin press office stated that the two presidents discussed restoring order in Kazakhstan and the withdrawal of the forces of the Collective Security Treaty Organization (CSTO).

The statement confirmed that the Kazakh president briefed his Russian counterpart on the measures aimed at completing the restoration of order in his country, which comes taking into account the role of the peacekeeping forces of the Collective Security Treaty Organization.

Tokayev expressed his special gratitude to Russia for its support and assistance to Kazakhstan during the recent crisis, as Moscow is an ally and strategic partner of Kazakhstan within the Collective Security Treaty Organization.

In this context, the Kazakh authorities resumed air traffic at Almaty International Airport yesterday after the recent crisis ended.

The Kazakh Civil Aviation Authority said in a statement that the airport resumed its work yesterday, and according to preliminary information from the airport administration, domestic and international flights will operate according to the airline’s flight schedule.

The first civilian flight arrived yesterday at Almaty airport, which has been closed since last week after it was looted.

For his part, Russian Deputy Foreign Minister Sergei Ryabkov announced yesterday that during the “security” negotiations with the United States, the issue of Kazakhstan was not directly addressed, but was in the background.

In an interview with RTVI, Ryabkov said, in response to a question about whether the issue of Kazakhstan was discussed in recent meetings with Western partners: “During the Geneva talks, as I understand, and in the Brussels negotiations, this issue was not discussed, but it came in a different way. Visible in the background.

And the Americans were unable to restrain themselves, so these rather revealing comments that I heard from Washington showed us a lot and confirmed the view of our worst assumptions that the United States is rushing towards the so-called post-Soviet states of Greater Eurasia. What are its goals? .. This is a very difficult topic.”

Corona injuries increased by 89%, and deaths decreased by 13% in the Eastern Mediterranean