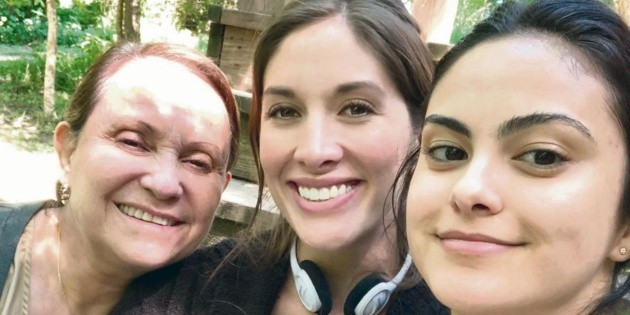 The film is a drama that was shot in 2018 in the United States, with a script written by Sara Beligman herself and Thomas Bond, in fact, thanks to this work she received the TAA grant from the Tribeca Film Institute and the Film Independent fast track.

“It has been a pretty crazy journey, one imagines many things, many hopes and many dreams, but sometimes we don’t know how we are going to feel when they really happen. I think the biggest thing for me, and that I still don’t believe myself, is having made the teacher Adriana Barraza part of this film. And still when I see photos from the set where I’m directing it, I say ‘wow!’. I am very excited that the film will finally arrive in Mexico, I hope that people will see it and enjoy it a lot ”.

In this history, the director addresses the complex relationship between a mother and her daughter, Adriana Barraza once again demonstrates its ability histrionic by incarnating a woman who appears to be calm and restrained, but inside it is full of darkness, on the other hand there is Camila, who plays a young woman with dreams and goals to fulfill, but at the same time she is inside a macabre game with her own mother from which she cannot get out so easily .

“The relationship between children and parents is the first we have, it is a basic issue that we can all identify with, but since I really like suspense, I wanted to have this relationship (of mother and daughter) that is very toxic and codependent, to an extreme situation, and that is why I also put that idea that they were also accomplices in crime, to take that relationship to another level ”.

The director reiterates the capacity that Adriana Barraza has to transmit warmth on the screen, but on the other hand she develops a character with great darkness. In addition, I also wanted to get out of the stereotype that these characters, like those that Adriana and Camila do, are often for men, or that if they are female, they have to have certain characteristics, but here are two women of different generations who believe that what they do it is good, that although they are criminals, in their day to day they live a daily life like everyone else’s.

Sara shares that she also has three film projects in development, and hopes that at least one can start working, as the pandemic has slowed down the processes. However, in her creative work, she is interested in surrounding herself with women, teaming up with one another to propel herself and generate her own windows in the film industry.

What is it about?

“Coyote Lake” tells a story that takes place on a ranch in Texas near the Mexican border, where a controlling mother (Adriana Barraza) and her daughter (Camila Mendes) rent rooms to raise money and change their lives.

One day, two criminals arrive at the ranch and demand to stay. While “Ignacio” (Manny Pérez) recovers from a gunshot wound, “Paco” (Andrés Vélez) tries to take charge of the situation. What these men do not know is that mother and daughter hide a secret darker and more violent than they.