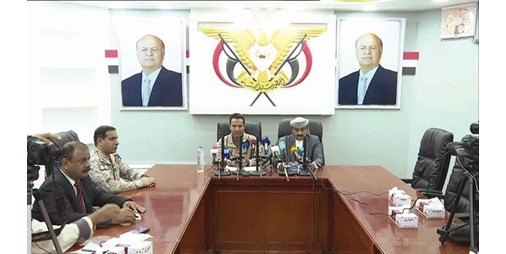 The spokesman for the Coalition to Support Legitimacy in Yemen, Brigadier General Turki Al-Maliki, announced the launch of the “Happy Yemen Freedom” operation, explaining that it is not a military operation, but rather a developmental operation in order to take care of the Yemeni people, stressing the importance of humanitarian and relief work in the country, whether in liberated Shabwa or Ma’rib, which It includes thousands of displaced people, in addition to other areas.

During a joint press conference with the Yemeni governor of Shabwa, Awad Al-Awlaki, Al-Maliki confirmed the presence of many displaced people who fled the Houthi violations.

He expressed his happiness with the liberation of Shabwa, and thanked the Giants Brigades and the Army, in addition to the UAE for their support. He also valued those moments, which he described as historic, as a result of the complete liberation of the province from the militias, considering that the Yemenis, as they liberated Shabwa, can liberate all of the country if they unite.

Al-Maliki explained that the coalition supported the operations of the Yemeni army and is still supporting them in order to cleanse the country of the Houthi militias, as well as the legitimate government, for the benefit of all Yemenis. doubt.

For his part, Shabwa Governor Awad al-Awlaki thanked the coalition’s support, saying: “We appreciate the air support provided by the Coalition to Support Legitimacy in restoring the province.”

He stressed that the coalition’s role is essential in the victory over the Houthis and the liberation of the three governorate districts, Usaylan, Bayhan and Ain.

The coalition had announced earlier yesterday, that it had carried out 37 targets against the militias in Shabwa, within 24 hours, and destroyed 25 military vehicles, noting that more than 230 Houthi members had been killed.

Meanwhile, the United Nations Mission to Support the Hodeidah Agreement in Yemen confirmed its concern about the “militarization” of the Houthi militias of the ports of Hodeidah on the Red Sea.

The UN mission said in a statement yesterday that it notes “with great concern the allegations related to the use of Al-Hadda ports for military purposes.”

The UN mission stated that “the ports are a lifeline for millions of Yemeni citizens.”

The United Nations also called for giving “highest priority to preserving the civilian nature of infrastructure and public facilities, and ensuring the protection of ports in the interest of the Yemeni people.”

This came the day after the Coalition to Support Legitimacy accused the Houthi rebels and Iran, which supports them, of using the Yemeni ports of Hodeidah and Saleef for military purposes.

According to the coalition, “the port of Hodeidah is the main port for receiving Iranian ballistic missiles,” while the United Arab Emirates demanded, in a letter addressed to the United Nations Security Council, the immediate release of the “Rawabi” ship, which was hijacked by the Houthis in the Red Sea, stressing that it includes on board. 11 people of different nationalities.

The UAE representative to the United Nations, Lana Nusseibeh, said in the letter addressed to the Security Council that the ship’s crew consists of “11 people of different nationalities, seven from India and one each from Ethiopia, Indonesia, Burma and the Philippines.”

Oscar Awards: The ceremony will have a host again in 2022