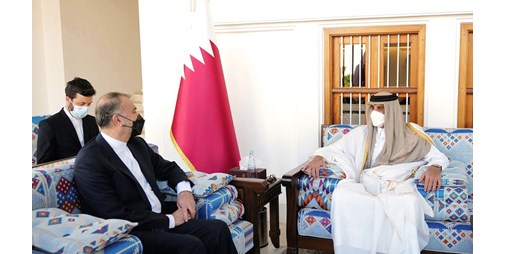 The Emir of Qatar, His Highness Sheikh Tamim bin Hamad Al Thani, received in Doha yesterday Iranian Foreign Minister Hossein Amir Abdollahian on the occasion of his visit to the country.

Yesterday, the official Qatar News Agency (QNA) stated that during the meeting, they reviewed bilateral relations between the two countries and ways to support and enhance them, in addition to exchanging views on the most prominent regional and international issues, especially the developments in the region.

The Iranian Foreign Ministry stated that the two sides discussed during the meeting “the latest developments related to the nuclear talks in Vienna regarding lifting sanctions on Iran and issues related to Afghanistan and Yemen.”

The official Iranian news agency (IRNA) said that the Emir of Qatar stressed during the meeting the importance of relations between the two countries and the expansion of cooperation on regional and bilateral issues.

For his part, the Iranian Foreign Minister conveyed to His Highness Sheikh Tamim bin Hamad Al Thani the greetings of President Ibrahim Raisi, and reviewed the developments in relations between the two countries in various political, commercial, security and economic fields, and the possibilities available to develop relations between the two countries in the field of economic transactions.

He stressed the need to crystallize cooperation between the two countries in the economic field, given the advantages that Iran enjoys.

(IRNA) added that Abdollahian explained during the meeting the policy of his country’s government in relations with neighboring countries, noting the exchange of delegations between Tehran and Doha at the highest levels to consult on current issues.

Abdollahian stressed Iran’s regional vision and its readiness to develop dealings with the countries of the region in bilateral or multilateral formats.

The Iranian minister arrived in Doha yesterday evening from Muscat, where he paid an official visit to the Sultanate of Oman, which lasted for one day, and held talks with its senior officials on bilateral relations and the most important regional and international issues.

Before his arrival in Qatar, IRNA news agency quoted Abdollahian as confirming that the two visits to Muscat and Doha come within the framework of Tehran’s policy of strengthening and consolidating relations with neighboring countries.

He stated that the purpose of his visit to Qatar is to discuss bilateral issues and regional and international developments, in addition to developing bilateral cooperation, especially trade, opportunities for cooperation in organizing the World Cup in Qatar, and the possibility of benefiting from Iran’s energies in the field of technical and engineering services.

Sebastián Tamayo, former protagonist, was drugged and injured in Bogotá