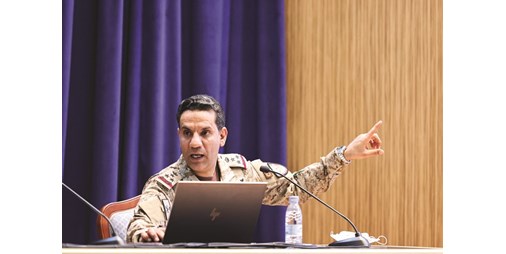 The official spokesman for the Coalition to Support Legitimacy in Yemen, Brigadier General Turki Al-Maliki, said that the Houthis’ use of civilian sites will turn the ports of Hodeidah and Saleef in Yemen into legitimate military targets for the coalition.

Al-Maliki added in a press conference broadcast by the official Saudi TV yesterday, “We do not want to target the ports. We want to reach a comprehensive political solution, but when the Houthis use civilian sites, they forfeit international immunity. Thus, (Hodeidah and Saleef ports) will be a legitimate military target.”

He explained that the Houthi militias continue their violations of international navigation in the Red Sea, stressing that the ships that were subjected to piracy attacks by these militias were planned by the Iranian Revolutionary Guard, presenting a set of evidence including photos and videos.

And he indicated that the Houthi militias violated international laws with piracy and kidnapping operations in international waters, and revealed that these militias launched 432 ballistic missiles from Hodeidah, in addition to 100 booby-trapped boats to target navigation in the Red Sea.

He explained that the coalition recorded 13 violations on commercial ships by Houthi militias from Hodeidah, noting the destruction of dozens of mines planted by the militias in the Red Sea.

In parallel, Al-Maliki stated that the Houthi militia had planned to hijack the “Rawabi” ship, which carries the flag of the United Arab Emirates, in international waters, indicating that the ship was carrying aid for those affected by the hurricanes on the island of Socotra.

In a video presentation, he indicated that the Houthi militia attacked the tugboat “Rabigh 3” in the south of the Red Sea, and targeted the Saudi oil tanker Abqaiq in the Red Sea as well.

In addition, the coalition spokesman indicated that the Iranian ship “Savez” is of a military character with a civilian cover, as it transports Iran’s weapons to Hodeidah, and presented a set of photos showing the weapons that Iran tried to smuggle to the Houthis through the port of Hodeidah.

He added that Hodeidah is the main port for receiving Iranian ballistic missiles, showing private pictures of those missiles in the port. He also indicated that Iranian missiles are assembled in the port of Hodeidah before being transferred to other sites.

He also showed the locations of Houthi warehouses for Iran’s ballistic missiles near the port of Hodeidah, pointing out that the Houthi militias store these missiles in tunnels before transferring them to Sanaa.

In a related context, the Coalition to Support Legitimacy presented evidence of Houthi recruitment of children in order to threaten and piracy international shipping, and presented other evidence exposing the Houthi militia’s attack on a Turkish ship carrying wheat.

The coalition also presented a military test area for the Houthi militia near the Salif port, pointing out that they are testing booby-trapped boats near the port, indicating that the militias are exploiting the Salif port militarily, also using civilians as human shields there.

Corona injuries increased by 71% in a week, and China completely fed more than 1 2 billion people

Inmates gave themselves a ‘can’ to the can inside a penitentiary