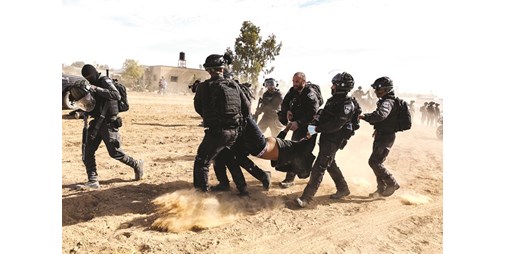 An 80-year-old Palestinian man was found dead in a village in the northern occupied West Bank yesterday after Israeli soldiers detained him and left him handcuffed.

The head of the local council, Fuad Mutee, confirmed to AFP that a unit of 30 to 40 Israeli soldiers ambushed the center of the village of Jaljalia, where they stopped cars in the middle of the village, arrested its passengers and handcuffed them.

Mutee added that Omar Abdul Majeed Asaad was returning to his home after visiting his relatives, when he was arrested, handcuffed, beaten and left in a building under construction.

Asaad was found dead in the early hours of yesterday morning, after the soldiers left the village, according to Motee.

The Palestinian Ministry of Health confirmed the account and said that the incident caused Asaad to suffer a “heart attack.”

This incident comes a day after clashes between Birzeit University students, north of Ramallah, and Israeli soldiers, which resulted in several injuries, according to the Palestinian Red Crescent Society.

On the other hand, the Israeli occupation forces arrested 13 Palestinians, including a freed prisoner, from separate areas in the West Bank.

Palestinian security sources reported that Hebron governorate in the south of the West Bank topped the list of arrests, as 7 Palestinian citizens were arrested during a raid and search campaign carried out in the city of Hebron and the towns of Yatta and Halhul, while in Jenin governorate in the northern West Bank, 3 Palestinians were arrested from the town of Al-Silat Al-Harithiya after the forces stormed The occupation of the town and the raid of a number of houses.

Coronavirus infections do not stop rising in Bogotá: 6,820 this Wednesday