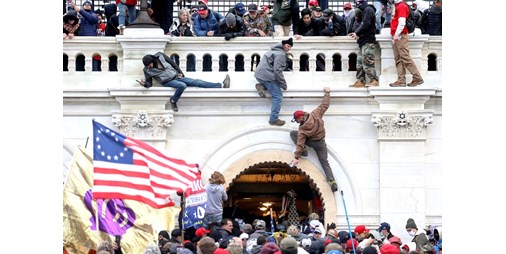 Just hours after US President Joe Biden’s offensive speech on the occasion of the first anniversary of the Capitol invasion, another scene shook American political circles.

During the commemoration of the attack on Congress, a minute of silence was called in the House of Representatives, as dozens of Democrats denounced the attack by supporters of former President Donald Trump, and while only two Republicans were among the empty seats in the House, one of them, Dick Cheney, former Vice President Bush.

Cheney, the neoconservative not known for his closeness to the opposition Democratic camp, justified why the Republicans ignored the commemoration of the Capitol attack, saying, “This is not the kind of leadership I had when I was here for ten years.”

Does this mean that Dick Cheney, who was one of the driving forces behind the US invasion of Iraq, criticizes the Republican Party? The octogenarian, whose career was the focus of the 2018 movie “Vice,” became very briefly an ally of the Democrats.

In this regard, Alan Lichtman, a professor at the American University in Washington, told AFP that from a political point of view, “what Dick Cheney did is remarkable.”

Donald Trump’s domination of the Republicans dragged the party to the right and allowed those Republicans who had plunged the United States into endless wars to re-emerge.

George W. Bush, who was heavily criticized for his “war on terror”, has emerged in a new image as an advocate for immigration.
Colin Powell, the man who asserted to the United Nations that he had evidence of chemical weapons in Iraq, was also praised as a brilliant military officer after his death.

By criticizing Trump, these politicians have re-polished their image. But if the Republican Party’s old guard dares to break the silence, they don’t really risk much, Lichtman says.

The one who has a lot to lose is Liz Cheney, the other Republican who attended the January 6 minute’s silence, daughter of Dick Cheney and an elected Wyoming.

This heiress to the traditional right has also become a mouthpiece for the few anti-Trump Republicans.

After she voted to impeach Trump, which the billionaire eventually got away with, Liz Cheney became one of two elected Republicans to agree to participate in the parliamentary inquiry seeking to clarify the circumstances of the attack on Congress.
Commenting on this, Lichman said, “She is jeopardizing her political career,” adding, “We will remember her as a loud, principled but almost lonely voice within the Republican Party.”

Indeed, Liz Cheney has become Trump’s enemy and one of his staunch Republican enemies in the US Congress.

The former president did not provide his criticism of her, as he intensified harsh statements against this “treacherous and hostile” woman, as he described her, declaring in September 2021 that he supports her opponent in the Republican primary elections to prevent her re-election.

This election, in Wyoming, is expected to be one of the most closely watched midterm elections.