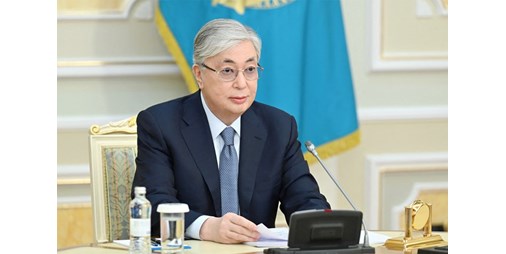 In an indication of the return of the security situation in Kazakhstan to normal, President Kassym-Gomert Tokayev announced yesterday that the Russian-led military forces that deployed in the country after bloody unrest will begin to leave tomorrow, and aimed his arrows at his predecessor, the strongman of Kazakhstan Nursultan Nazarbayev, who enjoys wide influence.

“The main task of the CSTO forces has been successfully completed,” Tokayev said in statements to the government and parliament in a video conference. “Within two days, a gradual withdrawal of the CSTO Joint Force will begin. The process of withdrawing the battalion will not take more than ten days.

On the other hand, the President of Kazakhstan yesterday accused his powerful guide and predecessor Nazarbayev of contributing to the emergence of a “wealthy class” that dominates this oil-rich country and its residents, after a week of unrest.

“Because of the former president, a group of very profitable companies and a class of very rich people appeared in the country,” Tokayev said, while the former leader’s daughters, son-in-law, grandchildren and other relatives control very important positions and economic interests in the Central Asian country.

The President of Kazakhstan said that he intends to present a package of political reforms next September. “In my next address to the people in September, I will present a new package of political reforms that will be prepared on the basis of a broad-based constructive dialogue with the people and experts,” he told lawmakers. He pointed out that Kazakhstan “will continue its path towards political modernization… This is my main position.” Tokayev stressed that “in general, the change in relations between the state and society is delayed. Therefore, we need a new form of social contract.”

In this context, Kazakh MPs confirmed the president’s decision to appoint Alikhan Ismailov as the new prime minister, after the resignation of the government last week in an attempt to calm the demonstrators.

Ismailov, 49, is a former finance minister who was also an aide to President Nazarbayev, who ruled the country with an iron fist for three decades until 2019.

Since there is no political opposition tolerated by the regime in Kazakhstan, the number of detainees in connection with the protests rose, according to what the Ministry of the Interior announced, to about ten thousand people, although it did not provide a specific toll for the human losses of the unrest.

In addition, press spokesman for the Russian presidency (Kremlin) Dmitry Peskov stressed that Kazakhstan’s decision to withdraw the peacekeeping unit of the Collective Security Treaty Organization is the country’s right and his country has no right to interfere.

“The decision to withdraw the right of the country that submitted this request to the Collective Security Treaty Organization is based only on their analyzes, and we have no right to interfere,” Peskov said, in press statements reported by the Russian news agency TASS.

Meanwhile, the head of the Russian State Duma (lower house), Vyacheslav Volodin, said: “The US leadership would like the CSTO peacekeeping mission not to be present in Kazakhstan, so that instability there will continue.”

Volodin added – in a statement yesterday, which was reported by several Russian media outlets: “We hear from Washington statements that ask for an explanation from the leadership of Kazakhstan why it turned to the Collective Security Treaty Organization for help,” noting that the US leadership would like the peacekeeping mission not to exist at all. Until the instability of the situation on the territory of Kazakhstan continues.

He stressed that humanitarian problems, human suffering and the destruction of the state are secondary matters for Washington, pointing out that “the whole world saw this in the examples of (NATO) forces entering Libya, Iraq, Syria and Afghanistan without any invitations from these countries.”