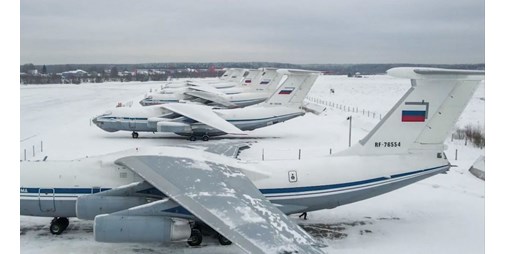 Capitals – Agencies: Kazakh President Kassym-Jomart Tokayev confirmed the restoration of constitutional order “to a large extent” in this country, after days of clashes between demonstrators and security forces in an unprecedented phenomenon that erupted due to an increase in gas prices that spread to all parts of the country after it began in Almaty, the economic capital of the country.

“Constitutional order has been largely restored in all regions,” President Tokayev said in a statement, stressing that operations to restore order will continue “until the combatants are completely eliminated.”

“Local authorities are controlling the situation, but the terrorists are still using weapons and causing damage to citizens’ property,” he added.

But Tokayev, in turn, rejected any possibility of negotiating with the protesters and promised to “eliminate” the “armed criminals”.

He said that their liquidation “will take place soon,” noting that Almaty was attacked by “twenty thousand criminals” who had a clear plan and enjoyed a high level of combat readiness.

At the same time, the Kazakh president announced that he had allowed the police to shoot “without prior warning” to put an end to the chaotic riots rocking the country.

“I gave the order to shoot to kill without prior warning,” Tokayev said in a televised address.

“The terrorists continue to destroy property and use weapons against citizens,” he added.

For its part, the Kazakh Interior Ministry announced the killing of 26 “armed criminals” and the wounding of 18 others.

It said in a statement that all regions of Kazakhstan had been “liberated and placed under enhanced protection”, with 70 checkpoints set up across the country.

In Almaty, which witnessed the most violent riots, “the forces of order, the armed forces and their auxiliary forces ensure public order, protect strategic infrastructure and clean the streets,” it said in the statement.

The riots, which included an exchange of gunfire, resulted in dozens of deaths and more than a thousand injuries, according to the authorities.

And the police reported the fall of 18 dead and 748 wounded.

More than 3,000 people were arrested across the country, according to the latest figures broadcast on television.

Violence continued last night, and according to Agence France-Presse, a large number of shots were heard in the center of the city of Almaty, which appeared to be traces of shooting on the facades of buildings blackened with flames, charred vehicle structures and bullet casings on the ground.

First Deputy Head of the Presidential Administration Dorin Abayev was quoted by RIA Novosti news agency as saying: In the beginning everything was peaceful.

But later, the peaceful protesters were drowned out by calls for violence from the instigators.

He added that the crowd “was led by bandits and armed terrorists,” explaining that “bandits” carried out looting, while others “carried out attacks with specific targets” to obtain firearms.

Aside from rising prices, the demonstrators poured out their anger, especially on former autocratic President Nursultan Nazarbayev, 81, who ruled the country from 1989 to 2019 and still enjoys great influence. He is considered the patron of the current president.

At the same time, the Russian Defense Ministry announced that the peacekeeping forces of the Collective Security Treaty Organization, along with the Kazakh security forces, managed to take control of the Almaty airport in Kazakhstan.

“Almaty airport, in cooperation with the Kazakh security forces, has been placed under full control,” Russian Defense Ministry spokesman Igor Konashenkov said in a statement today.

“The CSTO peacekeeping forces stand side by side with Kazakh law enforcement officers, and they keep ensuring the law and order in Kazakhstan,” he added, noting that the Russian Consulate General in Almaty and other facilities are currently under protection.

The statement continued, “The group of the Russian Air Force includes more than 70 aircraft operating around the clock in the airlift units of the Russian peacekeeping forces of the Collective Security Treaty Organization in Kazakhstan,” noting that the aviation of the Russian Aerospace Forces participates in the transport of military units to Belarus. and Tajikistan, Kyrgyzstan and Armenia to Kazakhstan.