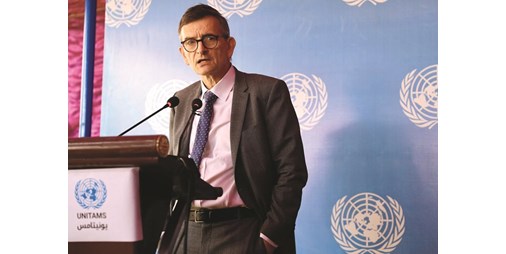 The head of the United Nations Transition Support Mission in Sudan (UNITAMS), Frilker Peretz, stressed that the United Nations did not present a project, draft or vision to solve the crisis in Sudan, but only launched a process of dialogue.

Peretz made it clear in a press conference in Khartoum yesterday that the UN mission did not put forward a proposal on the content of resolving the disputed issues, and it will not adopt a project for any side, as these matters are Sudanese, and we offer a process and consultations only, and we will not present a project in advance.

He added, “We are facilitators, and our project is to facilitate consultations between the Sudanese through us, and they are indirect consultations. We want to know from the Sudanese whom we invited, what is their vision about the next stage, and what are the priorities if we sit at the same table.”

He explained that it is not necessary that we discuss all issues at this particular stage, but we want to know the parties’ vision on priorities. If things go well, we may reach a stage where we discuss other issues, but I do not know how the future will go.

He expressed his belief that there is no objection to this initiative from the military or security establishment, pointing to international and regional support for this initiative.

He indicated that he will brief the UN Security Council on the situation in Sudan the day after tomorrow, and the “Friends of Sudan” countries will meet a week later, and is expected to play an important role in this regard.

He said that the UN mission invites governmental and non-governmental actors to participate in preliminary consultations, pointing out that these consultations will be in an individual form, at least in the beginning, and we expect that women and youth will have an active role in this process, and this matter comes within the framework of the Security Council’s mandate for UNITAMS » To support the democratic path.

Peretz denied what was mentioned regarding the Unitams mission to present a draft of a 4-point solution, stressing that “this news is false, and we will start this process by listening to all the actors and taking their opinions into consideration in order to determine where we can begin with the agreement.”

On the other hand, the Sudanese police announced the killing of a demonstrator and the injury of 30 demonstrators and a policeman in yesterday’s protests.

The police press office said in a statement yesterday, “Police officers recorded one death of a citizen in Bahri locality, and 8 others sustained minor injuries, in addition to the injury of 22 members of the police force.”

The police confirmed that they dealt with unruly cases among the demonstrators with reasonable legal force, announcing the arrest of 86 demonstrators and taking the necessary legal measures to confront them.

For its part, the Central Sudanese Doctors Committee (non-governmental) said in a parallel statement that two protesters were killed, and 68 were injured during Sunday’s demonstrations.