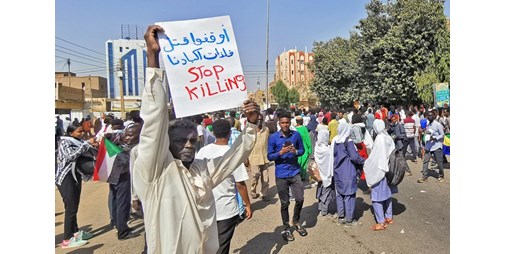 Sudanese security forces fired tear gas at thousands of anti-coup protesters to prevent them from reaching the presidential palace in Khartoum, while a police officer brigadier general was stabbed to death, just days after a UN-supervised dialogue was launched.

New protest rallies took place yesterday in the capital, Khartoum, and a number of other cities, under the slogan “Millions of January 13th”, in response to the call launched by the opposition forces, led by the Sudanese Professionals Association, to demand full civilian authority and the removal of the military.

Eyewitnesses stated that crowds of demonstrators in Omdurman organized a protest march on Al-Arbaeen Street, which is a vital street in the city and represents the shortest path towards a bridge linking the cities of Omdurman and Khartoum.

A police officer with the rank of brigadier was killed during the demonstrations, while the demonstrators chanted “Burhan and Heather Gaboh Al-Kizan”, a term used in Sudan to refer to the Islamists.

The police press office announced in an official statement posted on its Facebook page, “The designated Minister of the Interior and the Director General of Police counts with God Almighty, the Police Brigadier General, Ali Brima Hamad,” explaining that he was killed while protecting the protestors’ convoys. The Sudanese Ministry of Interior pledged to protect Sudan and the safety of its citizens.

Brigadier General Ali Brima Hamad is the first dead security force since the start of the demonstrations against the October 25, 2021 coup, which, according to the Central Doctors Committee, resulted in the killing of more than 63 demonstrators.

The Khartoum State Police had announced in a press circular the partial closure of some bridges linking the three cities of the capital: Khartoum, Omdurman and Khartoum North.

According to eyewitnesses, military units were deployed at the entrances to most bridges and on internal roads leading to the vicinity of the presidential palace and the field of the Sudanese army’s general command.

The new demonstrations came a few days after the United Nations launched talks that included all Sudanese factions in an attempt to resolve the crisis caused by Al-Burhan’s coup.

Meanwhile, Chargé d’Affairs of the US Embassy in Khartoum, Brian Shawkan, affirmed his country’s support for the Sudanese people to reach the stage of democratic transition.

According to the Sudan News Agency (SUNA), a member of the Transitional Sovereignty Council, Lieutenant-General Shams El-Din Kabbashi, met with the American diplomat at the Republican Palace yesterday.

Shawkan said in a press statement that the meeting touched on the developments of the political situation in Sudan, describing it as good, stressing his country’s support for the UNITAMS mission to perform its tasks.

Shawkan stressed the right of the Sudanese people to peaceful expression, stressing the importance of stopping violence and ensuring the right to peaceful demonstration.

Another for the list: Bridge in the south of Bogotá that has a real death trap