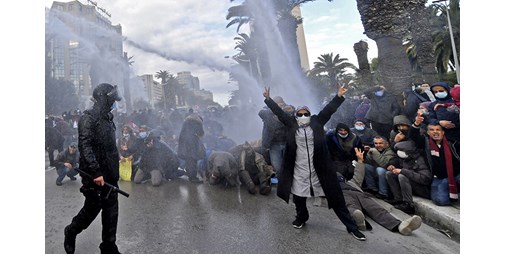 Tunisian police used water cannons to disperse hundreds of demonstrators who tried to reach the center of the capital on Friday during a protest march against President Kais Saied on the anniversary of the Tunisian revolution in 2011 known as the “Jasmine Revolution”, defying restrictions imposed by the Corona virus.

The heavy police presence prevented protesters from gathering on Habib Bourguiba Street, the main street in central Tunis and the center where demonstrations gather, including during the 2011 revolution that followed the path to democracy.

Witnesses said that the police later tried to disperse different groups of protesters. At the very least, the number of participants in one of these groups was estimated to be in the hundreds.

Some of the protesters managed to get past the barriers, and the police confronted them with tear gas and beat them, and arrested a number of them.

Opposition parties, including Ennahda, are protesting against President Kais Saied’s suspension of parliament’s work, his assumption of executive power, and moves to rewrite the constitution, which they describe as a coup.

These protests came despite the ban on all gatherings, which the government announced last Tuesday in an attempt to tackle the spread of COVID-19.
Opposition activist Shaima Issa said, “Saeed’s only response to the opponents is force and security forces… It is very sad to see Tunisia look like a military barracks on the anniversary of our revolution.”

Ennahda and other parties participating in the protest accused the government of imposing the ban and re-introducing the night curfew for political rather than health reasons as a way to prevent protests.

The day of the protests coincided with what Tunisians considered the anniversary of the revolution, the day former President Zine El Abidine Ben Ali fled the country.

Last year, President Kais Saied issued a decree to adopt the date of December 17, the anniversary of the burning of the street vendor, Mohamed Bouazizi, in protest against his living conditions, as an official date of the revolution, instead of January 14, the day Ben Ali fled the country.