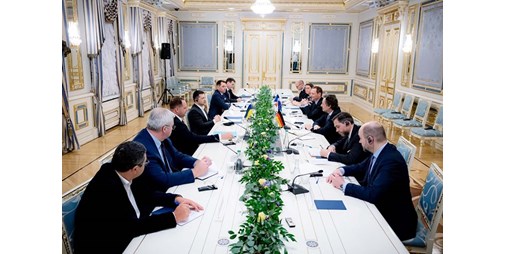 Ukrainian President Volodymyr Zelensky called yesterday for a four-way summit with Moscow, Paris and Berlin to “end the conflict” with pro-Russian separatists in eastern Ukraine, against the backdrop of international tension with Russia.

“The time has come to reach an agreement to end the conflict, and we are ready to take the necessary decisions during a new summit,” he said when receiving advisers to the French president and the German chancellor, according to a statement issued by the Ukrainian presidency.

The presidency did not clarify the nature of these decisions, adding at the same time that the negotiations also dealt with measures to be taken in order to “stop the escalation” on the Ukrainian border, where Russia has mobilized tens of thousands of troops.

The Ukrainian presidency also welcomed the “efforts” of the United States, NATO and Russia aimed at reducing the level of tension over Ukraine as part of a series of talks between Moscow and Western countries this week. “We can only commend the intentions and efforts of the United States, Russia and NATO to reduce tensions and resolve all common issues around the negotiating table,” Ukrainian presidential spokesman Sergei Nikiforov told AFP.

Zelensky’s call comes after the security negotiations on Ukraine, between Washington and Moscow, where the latter said that it is not optimistic and that it will not allow its demands for security guarantees from the West to be lost in strenuous negotiations.

Kremlin spokesman Dmitry Peskov said that the positive point in yesterday’s talks was that they were held in public and in an objective and direct manner, but Russia is only interested in the results. “There are no clear deadlines here, no one has set – there is just Russia’s position that we will not be satisfied with the endless slowdown in this process,” he added. Peskov added that the situation will be clearer after two more rounds of talks, which Russia is scheduled to hold with NATO in Brussels today and with the Organization for Security and Cooperation in Europe in Vienna tomorrow.

In contrast, US Deputy Secretary of State Wendy Sherman and head of the US delegation to the US-Russia discussions said she could not say whether Russia was ready to de-escalate tensions near Ukraine’s borders. The State Department quoted Sherman, after meeting with her counterpart Sergei Ryabkov in Geneva, that Washington understands de-escalation by the withdrawal of Russian forces from the Ukrainian borders to their permanent bases, pointing out that there is another option on the table, which is for Moscow to explain the nature and objectives of the large-scale exercises, under the pretext of strengthening its military presence. in the region.

Meanwhile, the Russian Information Agency and the Interfax news agency quoted a source as saying yesterday that the United States pledged to respond in writing to Russia’s proposals for obtaining strong security guarantees from the West.

Oscar Awards: The ceremony will have a host again in 2022