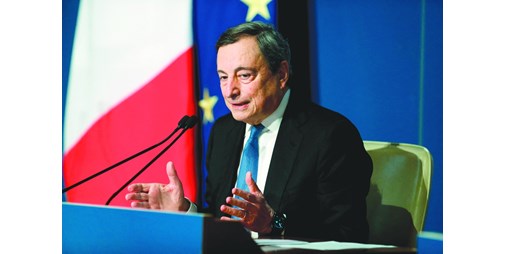 The Italian Parliament will convene on the 24th of this month to elect a President of the Republic, a prestigious position that current Prime Minister Mario Draghi appears to be the most likely candidate to occupy, although this risks undermining the country’s post-pandemic economic recovery.
Even if his role is theoretically honorary, the President of the Italian Republic has a major role in the event of a government crisis.
In this context, President Sergio Mattarella – whose seven-year term ends on February 3 – asked former European Central Bank President Mario Draghi in February 2021 to succeed Giuseppe Conte, who lost his majority in Parliament.
Draghi, 74, has since led a broad government coalition that includes the left and the far-right League led by Matteo Salvini, and Silvio Berlusconi’s Forza Italia (center-right).
It is attributed to Draghi, a figure appreciated by international partners, especially Brussels, that he succeeded in managing the health crisis caused by the “Covid-19” pandemic and began reforms (digitization, public administration reform and environmental transformation) using the country’s share of the huge European post-pandemic stimulus plan.
Italy, the third largest economy in the eurozone, was the biggest beneficiary of the plan with 191.5 billion euros for the 2021-2026 period.
Lorenzo Codogno, a lecturer at the London School of Economics, told AFP that Draghi, who had been careful not to speak publicly about his possible interest in the presidency, “is by default the frontrunner, because I don’t see anyone else who can at the moment.” To get the support of all political parties.
The arrival of Draghi to the presidency of the Italian Republic would pose the thorny problem of finding a successor capable of holding together the current fragile majority, which could lead to early elections.
Many prefer to see him in his position as prime minister until the legislative elections scheduled for 2023 in order to continue the reforms he started a year ago.
“Draghi has done a good job, but most of the projects he launched are still in progress and need time to be completed,” Codogno said. It will be necessary to have a new government that participates in implementing reforms along the lines of the current government.”
And Draghi is not alone in the presidential race: the Italian press has been rumored for weeks to succeed Mattarella, an 80-year-old Sicily who knows how to embody unity in troubled times.
Among the most popular names are the former President of the Chamber of Deputies, Pier Ferdinando Casini, former heads of government, Paolo Gentiloni, the current European Commissioner for Economic Affairs, and Giuliano Amato, who participated in the drafting of the European Constitution.
On the other hand, figures from the world of culture wrote in a recent open letter, “It is time to elect a woman.” In this unprecedented scenario, the current Minister of Justice, Marta Cartapia, 58, will have an opportunity similar to Paola Severino, 73, who was also Minister of Justice between 2011 and 2013 in Mario Monti’s government.
The method of electing the president in Italy is rather complicated, as deputies and senators, as well as representatives of the twenty Italian regions, or a total of about a thousand people, gather to vote.
In the first three rounds of voting, a two-thirds majority is necessary, but from the fourth round of voting, a simple majority is sufficient for the candidate to win the presidency. Voting is conducted by secret ballot, and this matter has repeatedly led to a surprise in the past, because some MPs do not abide by the instructions of their parties.
Therefore, there is uncertainty about the outcome of the upcoming presidential elections, “which is a commonplace in Italian politics,” according to Lorenzo Codogno.