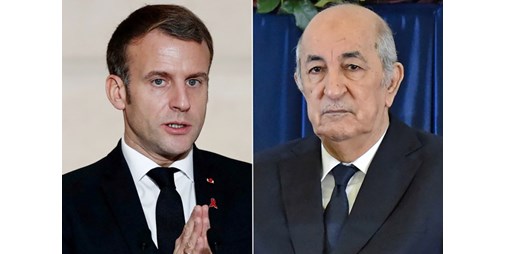 After three months of absence, the Algerian ambassador in Paris resumed his duties, in a gesture that would put an end, according to experts, to a dangerous diplomatic crisis with France, on the eve of the sixtieth anniversary of the end of the Algerian war (1954-1962).
President Abdelmadjid Tebboune received Algeria’s ambassador to France, Mohamed Antar Daoud, who returned to continue performing his duties in Paris, starting from Thursday 6.
On the second of last October, Algeria summoned its ambassador in response to statements carried by the newspaper “Le Monde” about French President Emmanuel Macron accusing the Algerian political regime of adopting a policy of “revenue of memory” regarding the war of Algeria and France, the former colonial power in it, after its independence in 1962.
Macron also questioned the existence of an “Algerian nation” before French colonialism in 1830, provoking angry reactions in Algerian society.
In response, Algeria banned French military aircraft bound for the African Sahel region from flying in its airspace.
And the Algerian president warned in early November 2021 that he would not take the “first step” to calm tensions with France and said that Macron “reopened an old conflict in a completely useless way,” stressing that the French president “insulted” the Algerians.

“misunderstanding”
On November 9, Macron announced, through one of his advisers, that he “regretted the quarrels and misunderstandings” with Algeria, stressing that he “has the greatest respect for the Algerian nation” and “its history.”
Algerian Foreign Minister Ramtane Lamamra welcomed these statements, which “express respect” towards his country, as he had visited Paris to attend a conference on Libya on the 12th of the same month.
In early December, French Foreign Minister Jean-Yves Le Drian visited Algeria with the aim of defusing the rare and dangerous bilateral crisis.
Le Drian called at the time for a “quiet relationship” so that the two countries could “look to the future.”
However, no agreement was reached during this visit regarding the resumption of the flights of French aircraft in Algerian airspace.
The last crisis between the two countries dates back to February 23, 2005, when the French parliament passed a law recognizing a “positive role for colonialism.”

‘Goodwill gesture’
In this regard, Hosni Obeidi, Director of the Center for Research and Studies on the Arab World and Mediterranean Countries in Geneva (Sirmam), said that “Macron’s return of his statements” and then Le Drian’s visit “were well received in Algeria and were interpreted as a goodwill gesture on the part of the French authorities.” .
Abidi added that with the return of the Algerian ambassador to Paris, “the crisis is behind us” because there is “a will on the part of Algeria and Paris in particular, on the eve of the sixtieth anniversary of the Evian Accords (of the ceasefire signed in March 1962), to overcome their differences and build a new relationship based on respect.”
For his part, Mansour Qadeer, a political scientist and historian, considered it “the beginning of calm,” and told AFP that the two countries “realized that it was in their interests to overcome rhetorical deviations and enter into a responsible dialogue,” pointing to “geopolitical challenges and security threats” in the region. .
Regarding the resumption of the flights of French planes in Algerian airspace, Abidi estimated that this will happen gradually and that there may be a “partial opening”, starting with medical transport flights, noting that “Algeria wants to move forward as usual by reducing escalation and improving relations in stages.”